“Women face challenges that their male colleagues simply do not have to deal with, and no where is this more evident than in the law enforcement sector, so we created a programme to empower them to be more self-confident." 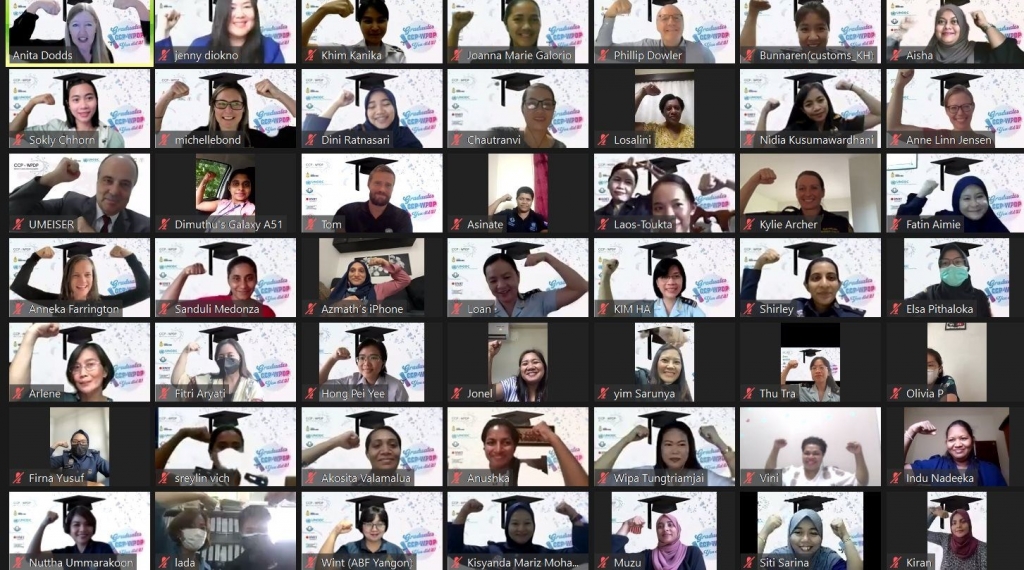 Nuttha Ummarakoon is part of the UNODC-WCO Container Control Programme (CCP), winner of the Gender Award under Category 2:Strengthening gender inclusivity in UNODC mandate areas, for its work on empowering female officers in law enforcement.

The CCP operates within customs and law enforcement, sectors known for their low inclusion of women, especially at senior levels. Cognizant of the significant underrepresentation of women in CCP Units − which currently stands at 15.5%, the CCP Women’s Network, − set out to empower emerging CCP women leaders from these regions through an immersive training course focused on building their leadership capabilities, technical skills, and networks. Fifty-eight women officers from eleven countries have since graduated from the CCP Women’s Professional Development Training (WPDP), with enhanced leadership skills and a renewed sense of confidence to progress in their careers. The WPDP was made possible thanks to the generous support of the Australian Border Force, and the expertise of RMIT University.

As a recently promoted National Programme Officer within the CCP and a member of its Women’s Network, Nuttha Ummarakoon both organized and participated in the flagship programme. She shared insights about her experience on both ends of the programme and her aspirations in a field where female officers are still underrepresented.

My name is Nuttha Ummarakoon, and I am a member of the Container Control Programme (CCP). The aim of the program is to provide technical assistance to customs authorities and other relevant law enforcement agencies around the world, including in South Asia, Southeast Asia and the Pacific. I began my UN career as an Administrative Staff Member and after three years in the regional CCP team, I was recently promoted to National Programme Officer.

Working with the CCP, I have witnessed the difficulties faced by many female customs officers. In law enforcement, women can often be perceived as of lesser value than their male counterparts. They often have fewer opportunities to become influential leaders in their respective organizations, due to various reasons such as cultural norms and perceptions, social conventions or a general lack of self-confidence. Noticing this trend, the CCP, which is jointly implemented by UNODC and the World Customs Organizations, joined forces with the Australian Border Force and RMIT University to create a programme that would help foster a more balanced representation of female officers in law enforcement: the CCP Women’s Professional Development Programme (WPDP). Thanks to many actors involved, we gained a range of expertise that contributed to our success. The WPDP aimed to empower female officers to be more self-confident and more knowledgeable about the career opportunities in the CCP network.

As a member of the CCP Women’s Network, I had the unique opportunity to participate in  the WPDP training course whilst also playing a lead role in organizing it. I have been involved since its inception, so it was really fulfilling to see it come together so well. Although taking on this dual role was challenging at times, it was wonderful being able to return to a learning environment after being out of university for so long. I can confidently say that it was one of the best things that I have been part of during my UN career. I am especially proud of my teammates, supervisors and colleagues for recognizing the importance of having this programme and teaming up with different stakeholders to achieve it. We nearly had 100% attendance every week and this is from custom officers who also worked full-time!

I think the high attendance was due to techniques from RMIT University. Their approach to education was very interactive and attractive to all the participants. Even as one of the organizers, I was curious and enthusiastic to attend the sessions every week. I am truly thankful for their expertise.

At the end of the five-week course, we had a graduation ceremony, and this is a moment that I will never forget. When I started the WPDP, I could have never expected that it would lead to creating such a strong bond between myself, my colleagues and other participants. I was honestly overwhelmed by the group’s positivity and the feedback on how much we have all developed as human beings thanks to this programme. It was such a beautiful moment to hear everyone’s experiences, from both a personal and professional perspective. It did not only enhance our professional and technical capacities, but it also taught us how to focus on our wellbeing. Having been involved in this project since its early days it was extremely rewarding to see the positive responses it generated.

Worldwide, the percentage of female customs officers is only 16%. In South Asia, women make up  approximately 9-10% of all customs officers, and although slightly higher, in Southeast Asia and the Pacific, this number is still only at 20%. The impact that female officers have on women’s empowerment, however, cannot be overstated. I can only hope that the WPDP will continue to run indefinitely, and that I will continue to play a role in its next phases. We must now nurture and improve the network and relations that we have built over the past year, to ensure that they remain meaningful and sustainable. Hopefully, in the future we will have more face-to-face interactions to foster networking opportunities. I also hope that we can include other aspects in the WPDP, such as focusing on people with disabilities and the LGBTIQ+ community.