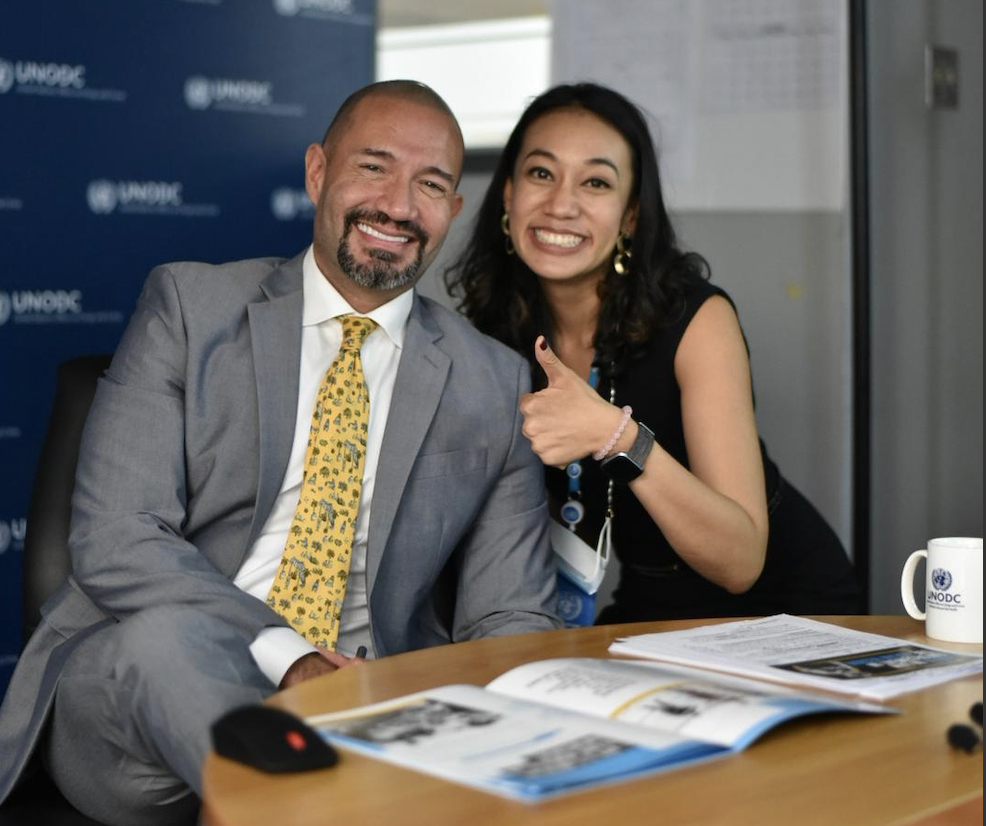 Cambodia, October 2021- The UNODC Regional Office for Southeast Asia and the Pacific (ROSEAP) is working on a project to tackle gender-based violence after a recent survey carried out by the Cambodia Centre for Human Rights found that one in five women had suffered violence during the pandemic. The project, funded by the German Federal Foreign Office, focuses on the use of community policing approach to improve law enforcement reponses to gender-based violence in high-risk areas in Phnom Penh, and improving police officers' skills to identify and interview victims. The project also aims to raise awareness about the services availbale to address gender-based violence and thereby strengthen community-policing pratices.

The UNOV/UNODC Gender Team spoke to E. Felipe De La Torre (Ecuador), UNODC Regional Coordinator for Southeast Asia, about the importance of gender mainstreaming in criminal justice responses to gender-based violence and took a deeper look into the motivations and aims of this initiative.

Gender Bulletin: A key component of the Project is the adoption of a gender-lens in community policing: how has gender been mainstreamed into the design of the Project?

E. Felipe De La Torre: I would like to firstly thank you for giving the Regional Office for Southeast Asia and the Pacific the opporunity to showcase this new project that I oversee with my colleague Valentina Pancieri. One of the main tendencies when gender mainstreaming is limiting interventions to language use (e.g by simply populating the project document with words like "gender" or "female"), or setting the number of women to be trained as indicators of success.

In the design phase of this project we made an effort to understand the conditions of vulnerability that both women and men face with respect to gender-based violence, avoiding biases with respect to the perpetrators of this violence. This initial knowledge led the project team to design a thorough survey with which we expect to reach a better understanding of the role that both women and men can play in reducing and addressing cases of gender-based violence and lear how lack of preparedness by law enforcement combined with poor infrastructure could revictimise the victims. For gender mainstreaming to work there needs to be a proper analysis otherwise it risks becoming a box ticking exercise with little hope to contributing towards achieving gender equality.

Gender Bulletin: The Project emphasises a contextual approach, using evidence-based activities in selected neighbourhoods. Why is it important to take a bottom-up approach in gender-sensitive activities and more specifically, when addressing gender-based violence?

E. Felipe De La Torre: The "think global, act local" premise is valid but when it comes to sensitive issues like gender-based violence, we believe the approach needs to be slightly different. There must be a deep understanding of the local conditions and circumstances in which our project operates before applying the global gender principles to the specific situation we have encountered.

There is usually a broad gap between the reality and the expectations of international conventions' provisions. For this project, we agreed with our donor that it would target two districts with high rates of gender-based violence, and we expect significant levels of involvement from the local communities in identifying the right approach.

Gender Bulletin: Could you describe the role of the female ambassadors in the Project? Why are they important to achieving its aims?

E. Felipe De La Torre: I am a fanatic of communication and advocacy issues. It depends on the nature of the initative of course, but in my opinion, the most amazing well-thought-out project could fail if there are no awareness activities. It is important to inform, sensitise and generate a reaction in the community as well as with the decision-makers who will ensure the legal or institutional change. We insisted on having a public awareness camapign to inform about the impact of gender-based violence, the rights of the victims and the service available to this population.

We came up with the idea to use female ambassadors to reach out to the younger population as influencers. However, once refining the project, we decided not to stop at female ambassadors but to also include male ambassadors to ensure the active participation of both women and men in project activities. We expect to identify persons from the world of sports, arts and culture in Cambodia who could be allies to convey our message. Furthermore, when focusing on law enforcement and community policing, we aim to also identify renowned male and female police officers that can join the campaign.

Ideally, we will produce a set of materials which will include a radio spot, a public service announcement and, depending on the literacy of the audience, other means of communication. We hope that the ambassadors will encourage the community and law enforcement officials to trust each other in reporting and addressing cases of gender-based violence.

Gender Bulletin: What advice would you give to UNODC colleagues who would like to promote gender equality in their work?

E. Felipe De La Torre: Gender equality should not be promoted because it is the fashion of the day or because it is in the SDGs. Gender equality is at the very heart of human rights and starts with the strong belief that as a human being, regardless of who you are or where you are from, we are all equal. This strong belief comes either from your family, your culture or because you learned it and are convinced about it. It is time though to also speak about intersectionality, which goes beyond gender equality. It is 2021 and sadly, gender, and one's background can still constitute as an obstacle, or an advantage, in one's career.