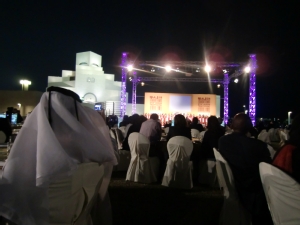 The Arab Initiative to combat human trafficking was launched during the Doha Foundation Forum 2010, a regional conference aimed at consulting and exchanging views from relevant stakeholders in the Middle East and North Africa region and building political consensus for future regional action against human trafficking.

The Arab Initiative, supported by the state of Qatar under the sponsorship of the First Lady of Qatar Sheika Mozah Bint Nasser al Missned, aims to build national capacities for the 22 Arab League States to effectively prevent and combat human trafficking. The main partners of the project are the Qatar Foundation for Combating Human Trafficking (QFCHT), the League of Arab States and UNODC.

The overall objective of the Arab Initiative to combat human trafficking is a 3 year regional capacity building programme aiming at supporting the Arab League States in:

(ii) Strengthening the institutional and human capacities of the criminal justice systems,

(iii) Improving mechanisms for the appropriate identification  referral, support, and protection of trafficked victims, and

(iv) Raising the awareness about the crime and its devastating consequences on individuals and societies at large. 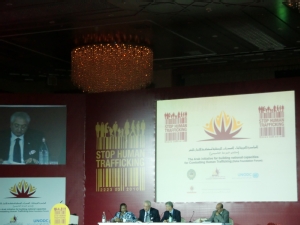 Key among the comprehensive set of recommendations released during the Doha Forum, was the call for Arab States to ratify the Trafficking in Persons Protocol, supplementing the United Nations Convention against Transnational Organized Crime. Governments of the region were also encouraged to establish specialist anti-trafficking law enforcement agencies and national funds to support trafficking victims.