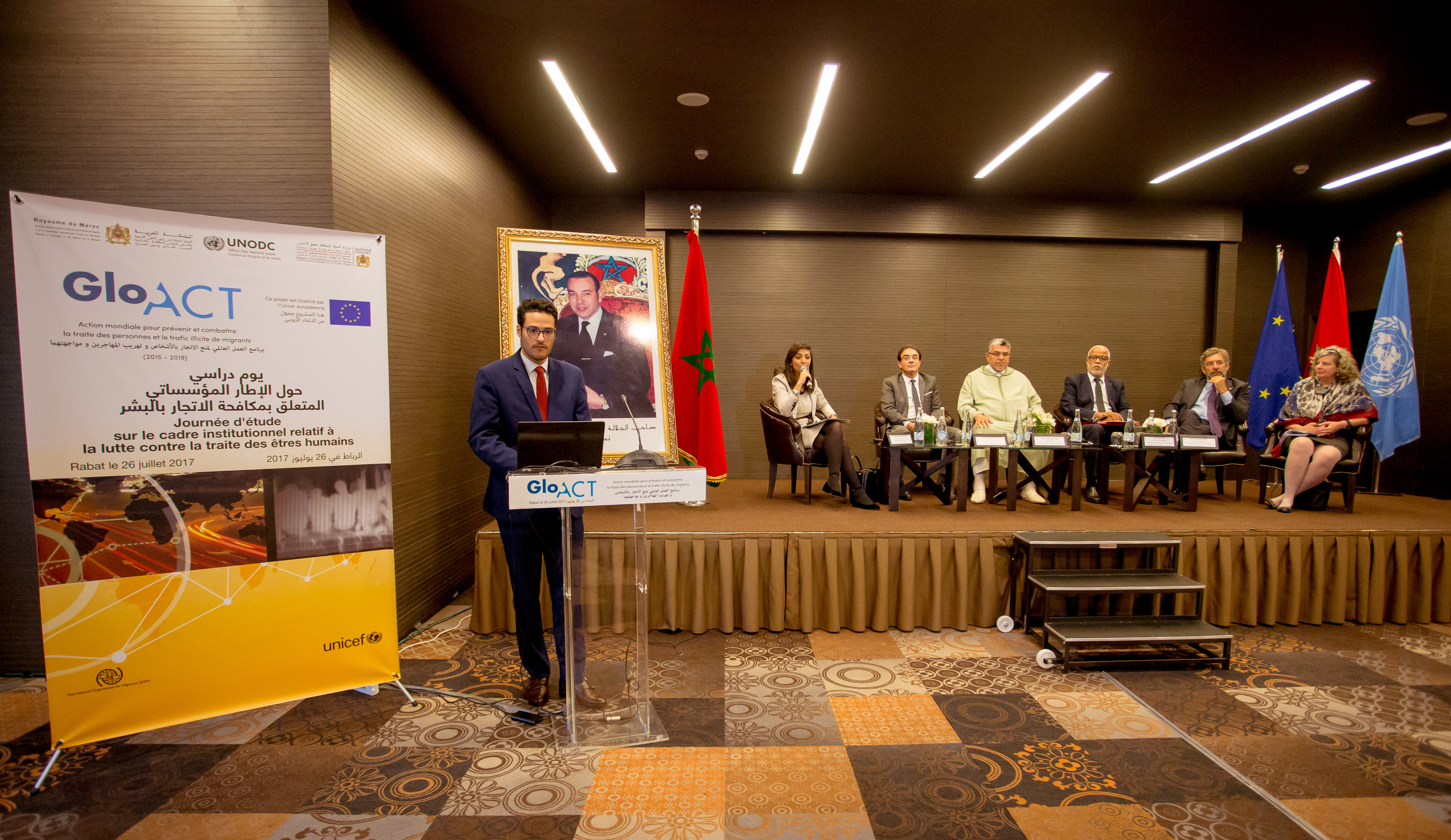 Rabat, Morocco - 7 August 2017 - Under the Global Action to Prevent and Address Trafficking in Persons and the Smuggling of Migrants (GLO.ACT) UNODC, in partnership with the Ministry of State in charge of Human Rights and the Delegated Ministry in charge of Moroccans Residing Abroad and Migration Affairs, organized a high-level workshop on Law 27-14 and its associated institutional framework on 26 July 2017.

Law 27-14 on combating human trafficking, adopted in 2016, introduces for the first time into Moroccan legislation the definition of Trafficking in Persons (TIP) in accordance with the Protocol to Prevent, Suppress and Punish Trafficking in Persons, especially Women and Children ratified by Morocco in 2011.

It is important to note that Law 27-14 makes the following provisions:

The aim of the workshop was therefore to bring together key governmental and civil society stakeholders, to develop recommendations aimed at fostering a coordinated and victim centered institutional response. 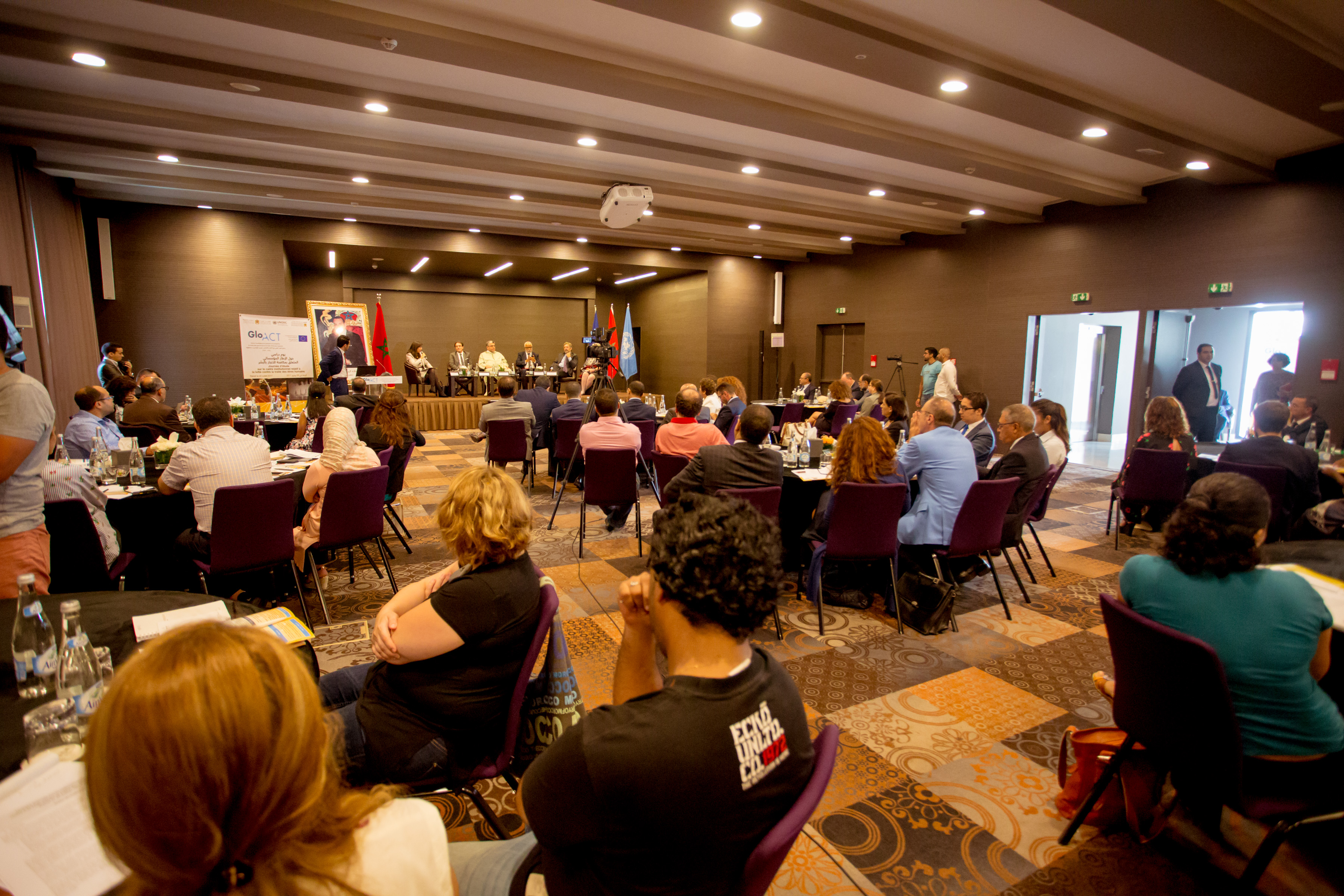 Addressing workshop participants, Mr. Philip Mikos, Head of Cooperation at the Delegation of the European Union to Morocco, said that: "We, the European Union, are happy support this project. The major challenge of the anti-trafficking law is to provide the necessary protection to victims. These are victims who may not necessarily be nationals and are therefore particularly vulnerable. The existence of the victim status, which is enshrined Law 27-14, must also be included in the future law on migration, as well as in the relevant implementing legislation."

While, Mr. Mustapha Ramid, Minister of State in charge of Human rights, said that "human trafficking is a very serious crime, at both national and international level. This is the reason why all the countries that care for human rights amended their national legislation and introduced procedures to better fight this phenomenon. In this context, Morocco amended its penal code and penal procedures code. This workshop represents a straight continuation of the efforts of Morocco, and will aim at discussing the mechanisms that will empower the national institutions in their fight against human trafficking."

The workshop focused on two key thematic areas. The first was a focus on institutional governance in the fight against TIP. Here, plenary sessions and smaller working groups explored ways to set up a national commission in charge of TIP. The second was to work on the coordination of a "chain of services" with a focus on the protection of victims. Here participants discussed steps that need to be taken to ensure efficient services between the various governmental and non-governmental actors can be delivered.

Addressing the audience via video message from UNODC Headquarters in Vienna, Ms. Margaret Akullo, Project Coordinator for GLO.ACT thanked the Government of Morocco and the Delegation of the European Union in Rabat for their presence and support in assisting in our common fight against human trafficking and migrant smuggling. She went on to say that she was delighted that the adoption of Law 27-14 was central to the workshop and concluded by reminding participants: "Our job fighting human trafficking is not done, so we look forward to drawing on your professional insight and continuing the dialogue".

During the workshop, participants also paid tribute to Judge Amina Oufroukhi, a judge within the Moroccan Ministry of Justice's Directorate of Criminal Affairs and Pardons, responsible for women's and children's issues, vulnerable populations, and trafficking in persons and the Department of Justice representative for GLO.ACT. Judge Oufroukhi has been honoured as a 2017 Trafficking in Person Report Hero. Speaking during the workshop, Judge Oufroukhi said that "during my visit to the State Department, I was asked to suggest a strategy for our action against human trafficking. My proposition was that we can all be agents of change in the fight against human trafficking. We can be the voice of the victims to allow them take back their human dignity." 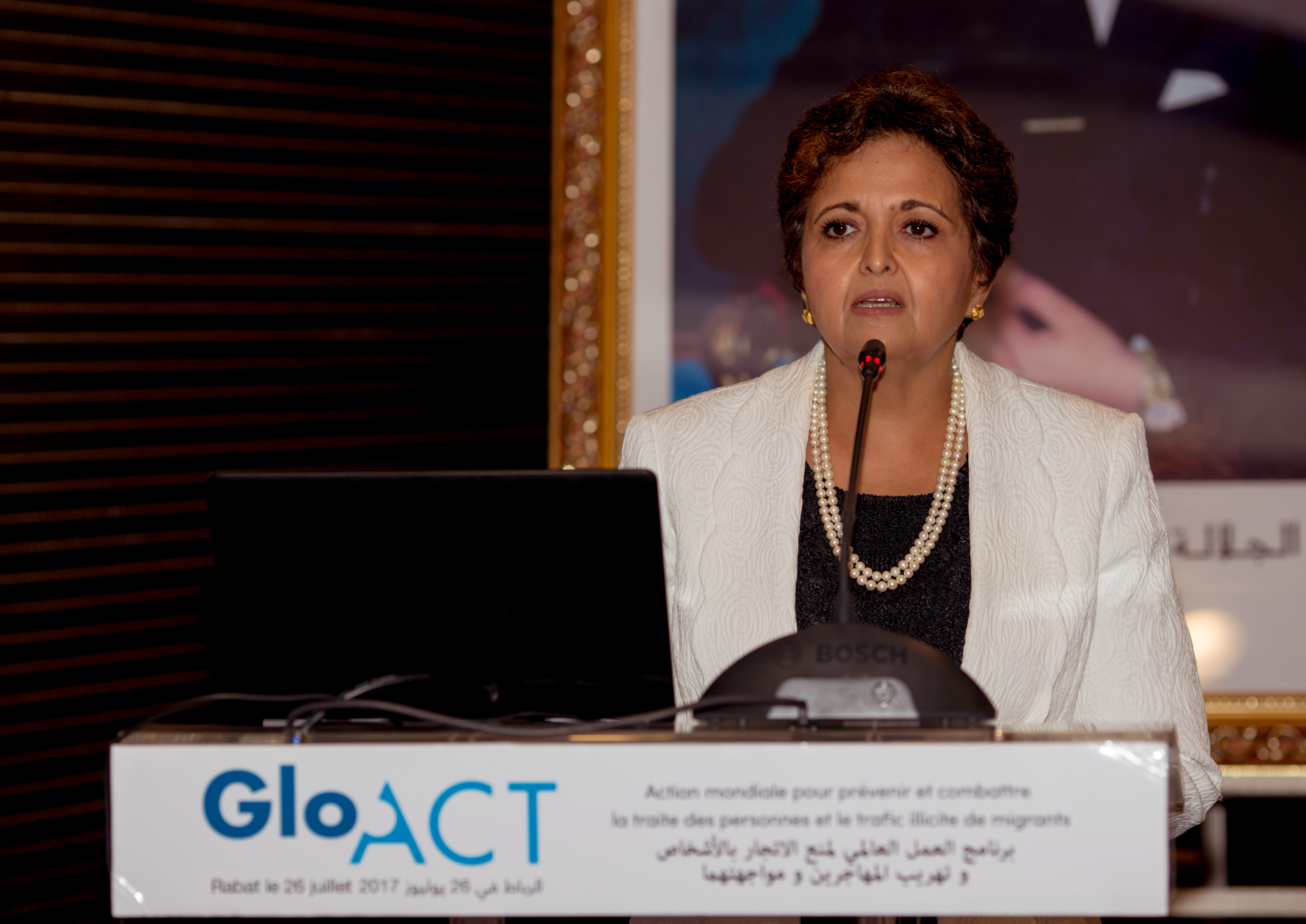 The workshop was rolled-out as an activity under GLO.ACT. GLO.ACT is a €11 million joint initiative by the European Union and the United Nations Office on Drugs and Crime (UNODC). The project is being implemented in partnership with the International Organization for Migration (IOM) and the United Nations Children's Fund (UNICEF) and reaches thirteen countries across Africa, Asia, Eastern Europe and Latin America, including Morocco. GLO.ACT works with the 13 countries to plan and implement strategic national counter-trafficking and counter smuggling efforts through a prevention, protection, prosecution, and partnerships approach.

[1] Act No. 19-12 on the conditions of work and employment of domestic workers adopted in July 2016 covers a category of jobs vulnerable to exploitation and TIP, especially women and children. Law 02-03 on the entry and stay of foreigners in Morocco is also relevant in this contact and numerous provisions in the Penal Code criminalize the elements of the offense of trafficking in human beings.