The Government of Bogotá and UNODC, under the framework of GLO.ACT, sign pact to prevent human trafficking and migrant smuggling 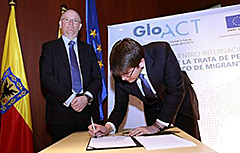 Bogotá, Colombia, 25 January 2018 - At a public event on best practices on the prevention of trafficking in persons (TIP) and the smuggling of migrants (SOM) organized by the City Mayor Office of Bogotá in collaboration UNODC Colombia, UNODC - under the framework of GLO.ACT - and the Government of Bogotá signed a GLO.PACT to work together on the prevention of human trafficking and migrant smuggling. Mr. Miguel Uribe, Government Secretary of Bogotá, and Mr. Bo Mathiasen, UNODC Country Representative, signed the pact during the opening ceremony of the public event. 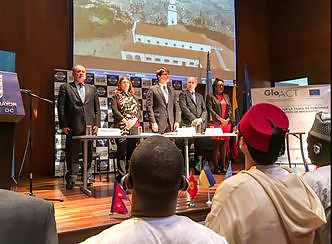 Addressing the audience, comprised of national police, district police, representatives of the City Mayor's Office, representatives of the National Committee against TIP and civil society organisations, Mr. Mathiasen highlighted the importance of having strong relationships with local government partners in order to be able to implement policies in the fight against TIP and SOM. Meanwhile, during his speech, Mr. Uribe said that "human trafficking is a crime that a single institution cannot tackle. We need all government institutions to cooperate in order to develop a coordinated effort." Also addressing the audience was Ms. Rachel Brazier, Ambassador in Charge of the European Delegation to Colombia. She spoke about the EU priorities in the fight against trafficking in human beings, focusing on victim identification and protection.

Following the opening speeches, Ms. Margaret Akullo, GLO.ACT Project Coordinator, introduced GLO.ACT to the audience. She explained that three things make GLO.ACT unique. Firstly, it is a joint EU-UNODC comprehensive project. Secondly, it has the benefit of a triple partnership between UNODC, IOM and UNICEF. Thirdly, it is being delivered across all regions of the world in Africa, Asia, Eastern Europe and Latin America. 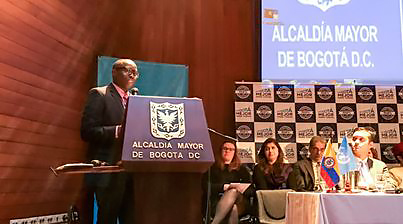 GLO.ACT's 12 National Project Officers (NPO), as well as UNODC HQ staff, also participated in the public event. After listening to a panel of local representatives and gaining insights into how Colombian government institutions and how local organizations work on TIP and SOM prevention, it was GLO.ACT's turn to share with the audience their best practices, challenges and lessons learnt. Each NPO highlighted and spoke about some of the best practice examples from their country. Mr. Banele Kunene, NPO for South Africa, took the opportunity to retell the story of a smuggled migrant he recently interviewed. The story he told painted a desperate picture of vulnerable people being exploited by criminal networks. In this case the young man was smuggled into South Africa in a truck that contained no windows. Struggling for air, he had to fight hard not to pass out during the hot and long journey. The young man also told Mr. Kunene that many of the children on the same truck did indeed pass out during the journey and that the smugglers took no notice of this. This is just one example of the life-threatening situations smuggled migrants can find themselves in. 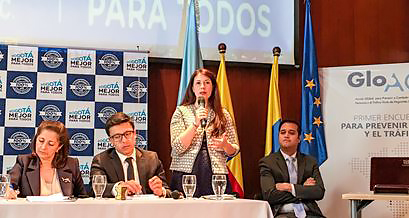 Following the presentations by GLO.ACT's NPO, the audience asked a broad range of questions. One participant for example asked whether GLO.ACT countries provide special funds for victim assistance, while another participant asked whether the project engages with destination countries. The public event concluded with a panel that included representatives from the local government, IOM, UNICEF, UNODC and civil society. Participants primarily spoke on the issue of prevention with Ms. Eurídice Márquez, UNODC Crime Prevention and Criminal Justice Officer, saying, "There are difficulties in terms of victim identification. We need to change the mindset of what a victim looks like and understand people's vulnerabilities." UNICEF representative Ms. Rocío Mojica echoed Ms. Márquez by explaining that the content of prevention campaigns needs to change. Campaigns need to have clear messages, need to be articulated to fit the local context and images need to stop showing victims in chains. 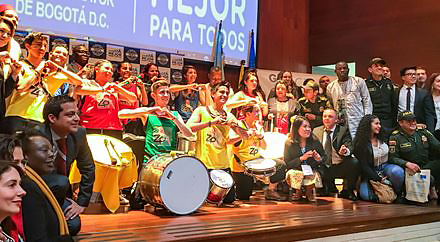 Following the event, the City Mayor Office of Bogotá organized a cultural presentation by a group called Batucada for all the participants. 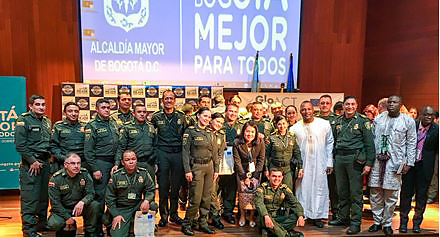