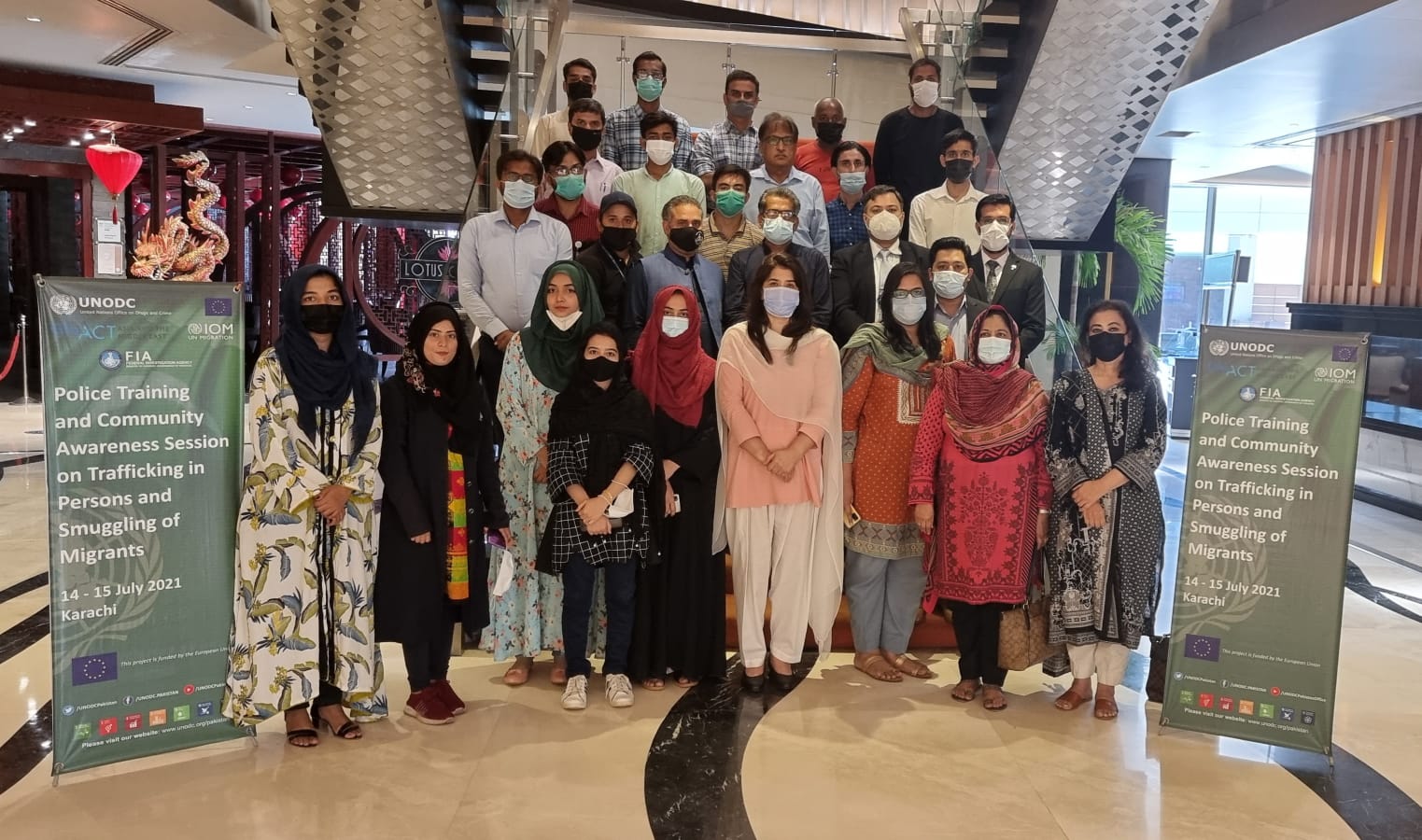 Shahida Gilani, Programme Officer – HTMS, UNODC, delivered welcome remarks and said, “This session has been arranged to raise awareness about human trafficking and migrant smuggling. In close consultation of FIA, UNODC assisted the Government of Pakistan to draft both the bills on TIP and SOM. This process took seven years and the Government of Pakistan enacted in 2018 "The Prevention of Trafficking in Persons Act, 2018" and "The Prevention of Smuggling of Migrants Act, 2018". These laws are based on a victim centred approach and the focus of these laws is to punish the offenders and provide assistance to victims of trafficking and migrant smuggling”.

Ms Gilani added, “Internal trafficking has caused untold harm to our society. There are many cases of internal trafficking like bonded labour, begging and sexual harassment, but due to lack of awareness about these crimes they are rampant”.

Sardar Zaheer Ahmed, Director Anti-Human Smuggling, FIA during his remarks said, “There is dire need to understand the concepts related to these crimes, as Pakistan is not only a country of transit, but is also directly affected by human trafficking both at the national  and regional level, being a part of a region strongly impacted by irregular migration”.

During his presentation, he highlighted the important provisions of TIP and SOM laws as well as the provisions of Pakistan penal code about TIP.

He said, “The effect of training and education on police officers is especially important because it helps officers to override reservations or uncertainties they encounter while performing their duty. This session is a platform for you to share your experiences and achievements”.

Following the sessions, one of the participants from media said, “This awareness session is very fruitful for all of us as we were unaware about these laws”. He suggested that there be more media in-depth training around sensitivities involved in reporting these crimes, saying “It will enable us not only to report them but also we can provide full coverage of sessions like the one we attended today in order to spread the word”.

During the sessions, participants also discussed theoretical principles necessary when dealing with human trafficking and migrant smuggling. These sessions enabled them to better define these two offenses which is evident through the testimonials below.

“This was a very informative session. The short session enabled me to further enhance my understanding about Trafficking in Persons. As police officer, we are dealing with different forms of exploitations. Most of them are covered in the definition of trafficking in persons, however, the session has helped me to understand which cases to deal under trafficking laws and which crimes should be dealt through related laws. “– Participant

On day one, total 24 law enforcement officials from Sindh Police and FIA, out of which 7 were females, attended the session. On day two total 23 participants out of which 9 were females, from civil society, media persons, Child Protection Bureau, Women Protection Bureau, NGOs, and students from Political science and International Relation departments from Federal Urdu University Karachi participated.

The project builds on a global community of practice set in motion in GLO.ACT 2015-2019 and assists governmental authorities and civil society organizations in targeted, innovative, and demand-driven interventions: sustaining effective strategy and policy development, legislative review and harmonization, capability development, and regional and trans-regional cooperation. The project also provides direct assistance to victims of human trafficking and vulnerable migrants through the strengthening of identification, referral, and protection mechanisms. The project is fully committed to mainstreaming Human Rights and Gender Equality  considerations across all of its activities.