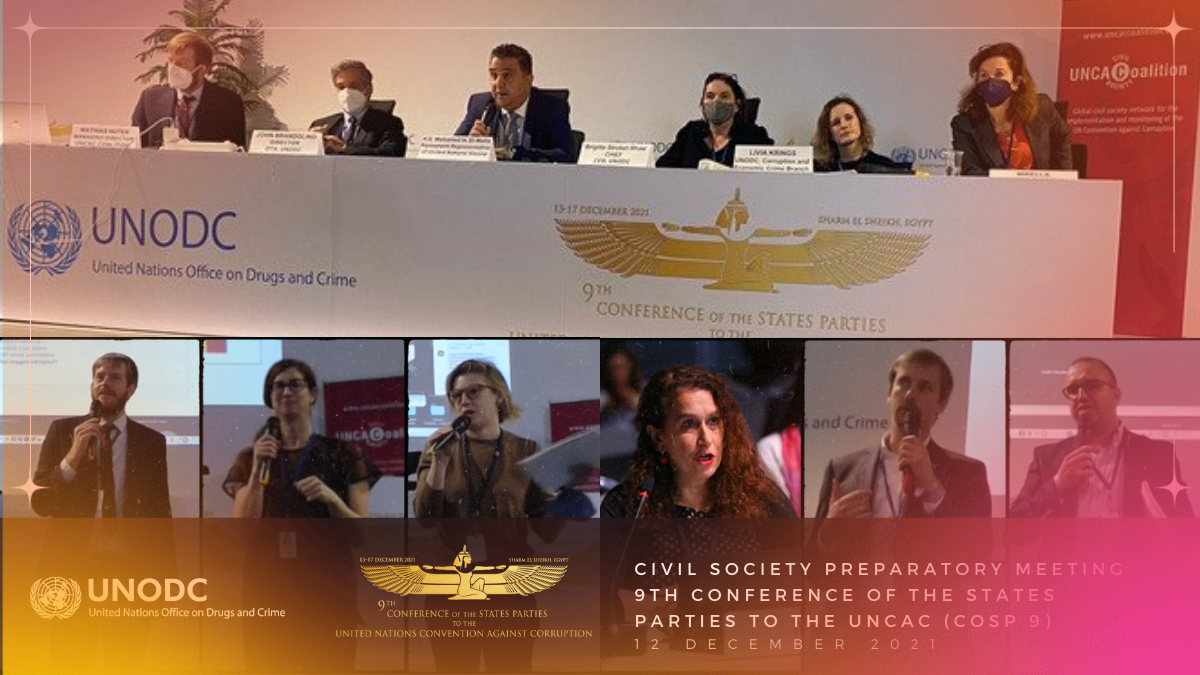 Sharm El-Sheikh (Egypt), 12 December 2021 - The United Nations Office of Drugs and Crime (UNODC) and the UNCAC Coalition organised a Civil Society Preparatory session on matters concerning NGO participation at the 9th Conference of the States Parties to the UNCAC (CoSP 9). The meeting took place in a hybrid format with H.E. Mr. Mohamed H. El-Molla, Permanent Representative of Egypt to the UN in Vienna, Mathias Huter, Managing Director of the UNCAC Coalition, and UNODC staff from the Conference Secretariat and the Civil Society Unit (CSU) welcoming the participants.

The United Nations Convention against Corruption (UNCAC) recognizes the role of civil society in combating corruption under Article 13, by calling on governments to increase transparency, improve public access to information and to promote public contributions to the government decision-making process, highlighted Mr. Ambassador Mohamed H. El-Molla, Permanent Representative of Egypt to the UN in Vienna.

John Brandolino, Director or Division for Treaty Affairs stressed that civil society has a special place in the Convention and the fight against corruption. UNODC is supportive of their role. UNODC Secretariat went through the procedures and rules governing NGO participation and explained the programme of the week ahead.

Mathias Huter, Managing Director of the UNCAC Coalition, moderated the afternoon session. He explained the issues of importance for NGOs including transparency, asset recovery, beneficial ownership and the implementation of the UNCAC review mechanism as well as the UNGASS declaration. Working groups met around these themes.

Mirella Dummar Frahi, Chief of the CSU, concluded the session praising the work the UNCAC Coalition in mobilizing civil society in promoting UNCAC the only legal instrument internationally binding.

Some 3000 participants from 117 of States parties are expected to participate in the Conference, including some 380 CSOs that registered to follow in person and online.

Mechanism for the Review of Implementation