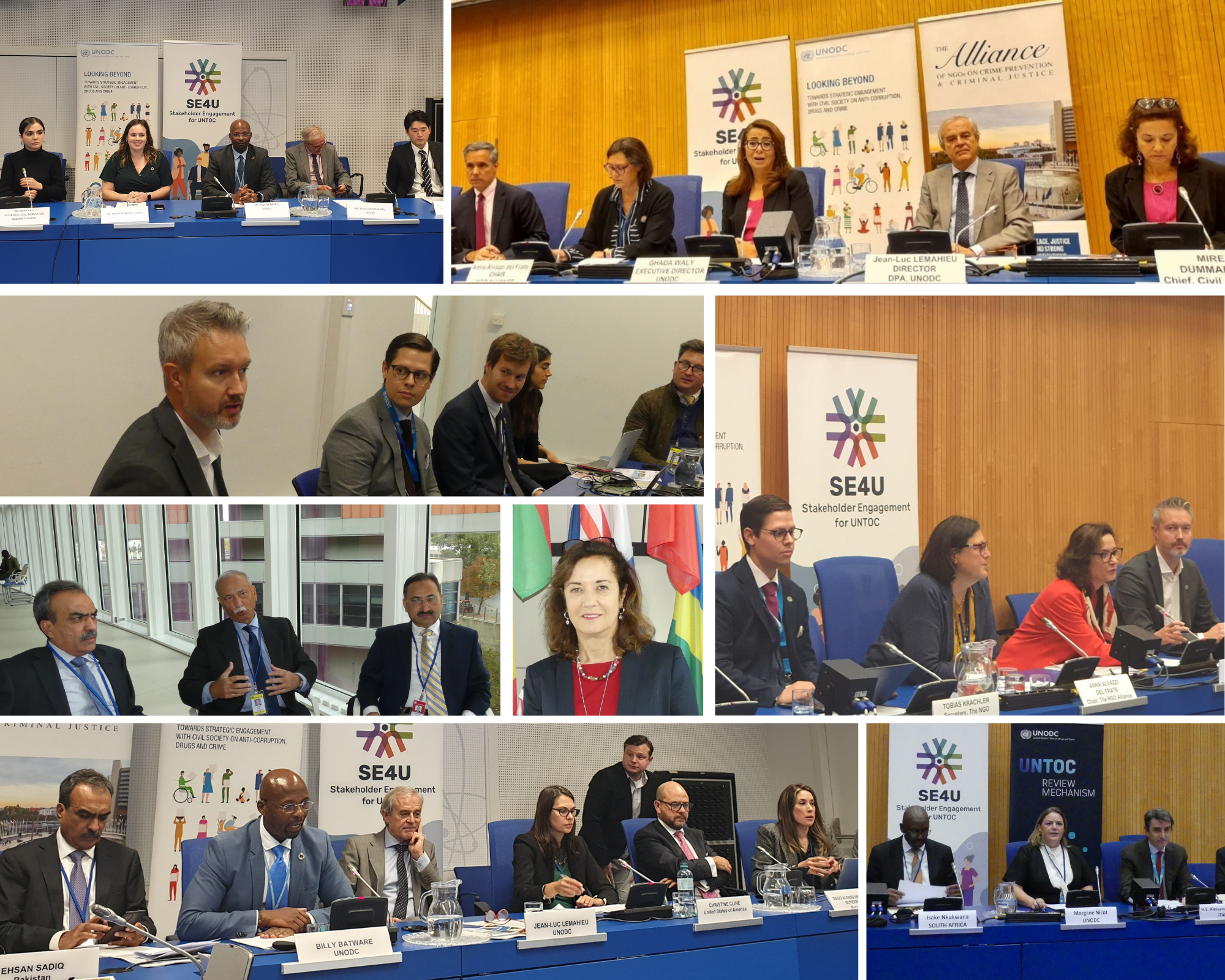 During its 11th session of Conference of the Parties to UNTOC (COP11) which took place on 17-21 October 2022, a record number of more than 500 delegates from over 193 NGOs participated, with almost half of the 70 featured side events were organized by or with CSOs.

In addition to the NGO briefing on the first day which was chaired by Mirella Dummar Frahi, chief of UNODC Civil Society Unit (CSU) and Anna Alvazzi del Frate, Chair of the Alliance of NGOs on Crime Prevention and Criminal Justice, CSO delegates had a unique opportunity to have an informal dialogue with UNODC’s Executive Director, Ms. Ghada Waly who shared her vision on engaging civil society in combating and preventing organized crime. According to her, the interaction between governments and civil society needs to be constructive and collaborative, working together in good faith to address organized crime as a shared challenge.

Cooperation between civil society and governments in addressing the nexus between drugs and crime was at the heart of the discussion during the side event on ‘Cross-cutting Evidence based intervention on drugs and crime in Africa for the Implementation of UNODC strategic Vision for Africa’, organized by the CSU together with Slum Child Foundation and the Alliance of NGOs on Crime Prevention and Criminal Justice. More than 60 people reflected on seven recommendations from the Africa Conference on Drugs and Crime that took place earlier this year.

The power and abilities of young people to contribute to a better and safer world were highlighted during a side event on youth engagement in UNODC mandates. “It's crucial to provide a platform for youth that helps to foster networks and present their voice to the world,” noted Mr. Jun Yamazaki, First Secretary at the Permanent Mission of Japan during his speech. The side event was a follow-up to the Youth Consultation preceding COP11, organized together with UNODC Strategic Planning and Inter-Agency Affairs Unit (SPIA) in close coordination with the Government of Japan. The outcomes of the consultation were presented from the perspective of young people, further strengthening meaningful engagement in the work of UNODC.

“Governments cannot address today’s transnational organized crime threats alone, nor do we have to. This is why it is imperative that we as governments ask for, utilize, and elevate civil society perspectives and expertise,” stressed Christine M. Cline, Division Chief of Multilateral Policy in the Office of Global Programs and Policy at U.S. Department of State during the side event on ‘Partnership for UNTOC implementation – two-year assessment of Stakeholder Engagement in the review process’. The achievements of the first Pilot Initiatives for UNTOC review in Mexico and Pakistan were also presented at this side event organized with the UNTOC Review Team, the Alliance of NGOs on Crime Prevention and Criminal Justice, and the governments of the United States, Mexico, and Canada.

The opportunities for governments to engage with CSOs through Constructive Dialogues were highlighted during the final side event on the progress on the UNTOC implementation review mechanism. Italy’s Ambassador Alessandro Cortese emphasized that working together helps to develop 360° policies against organized crime closer to the needs of our societies.

Collaborative engagement on the UNTOC Review Process between governments, civil society and other stakeholders will help achieve comprehensive progress in the fight against transnational organized crime – which was one of the strongest messages during COP11.