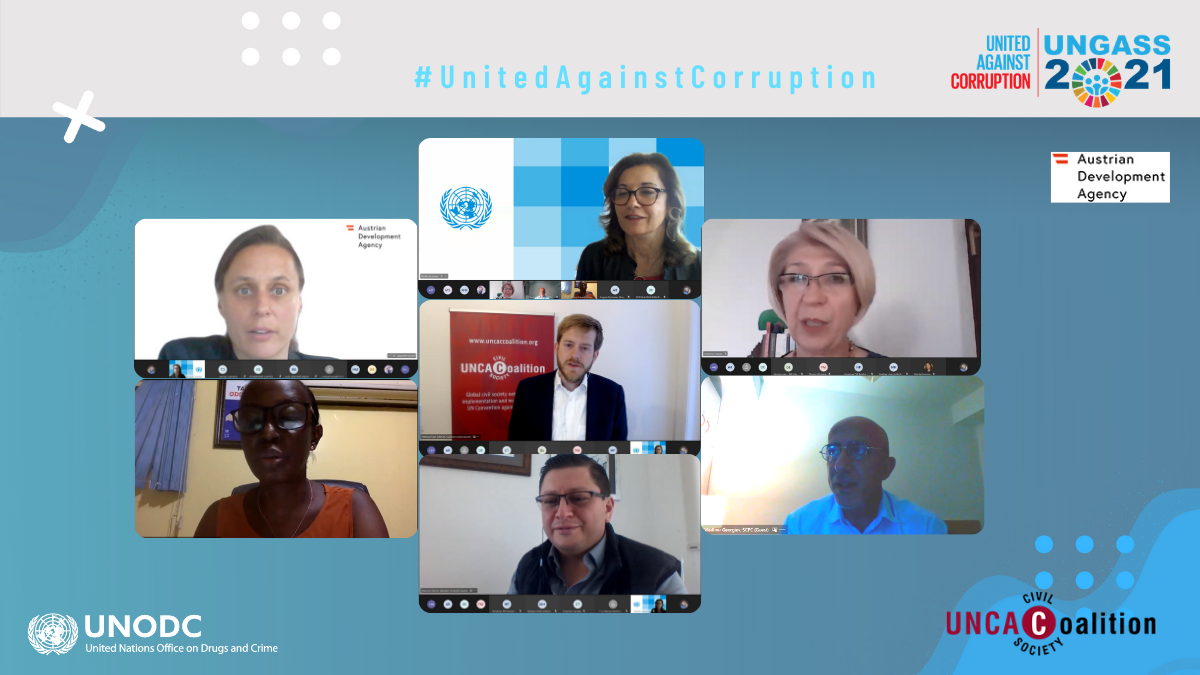 Vienna (Austria), 8 June 2021 – During the UN General Assembly Special Sessions (UNGASS) the UNODC Civil Society Unit together with the UNCAC Coalition organised the side event ‘Civil Society engagement in UNCAC and future steps’ that gathered experts from around the globe.

The event was moderated by Mirella Dummar Frahi, Chief of the UNODC Civil Society Unit (CSU), who emphasized the work UNODC does in promoting the United Nations Convention against Corruption (UNCAC) and its review mechanism in partnership with the UNCAC Coalition. She, specifically, highlighted the multi-stakeholder workshops, noting a decade of support received from the Austrian Development Agency (ADA). A representative from ADA, Michaela Flenner, stressed in her opening remarks that: "the vivid Civil society and media are important actors in showing a high level of corruptions in the country and beyond, which refers to the regional initiatives that we are supporting. The importance of CSO’s in curbing corruption is recognised by the UNCAC and reaffirmed by the UNGASS political declaration”.

The event was jointly organised with the UNCAC Coalition which is a global network of over 350 NGOs operating in 100 countries. Mathias Huter, Coalition’s Managing Director, highlighted the possibilities of how CSOs can be involved in the Review of the implementation of UNCAC, and the commitments adopted by the UNGASS.

In her intervention, Slagjana Taseva, Chair, Transparency International Macedonia, North Macedonia mentioned that all developments would not have been possible without the involvement of civil society actors: in South-East Europe, it was the CSOs that raised the awareness about the regional and international anti-corruption instruments such as the UNCAC. "I want to stress the role and importance of CSOs in creating legal and institutional basis, addressing the problem of corruption. Throughout the years we learned that it is easier, and it is important to work together to counter corruption. No matter how much success is achieved in different fronts until now it is our collective work that will define the chances for a fair and sustainable future” - said Slagjana. Her counterpart from the State Commission for Prevention of Corruption in North Macedonia Vladimir Georgiev emphasised the good relationship that government has with civil society.

Beauty Narteh, Executive Secretary, Ghana Anti-Corruption Coalition, Ghana, a participant of the UNODC multi-stakeholder workshop in Addis Abeba in April 2019 talked about her organization's involvement in the Review of the implementation of UNCAC in Ghana that followed later that year. “The focus of our coalition is to promote the fight against corruption and good governance, and it fits very well with UNCAC. I’m proud to say we supported the Implementation review mechanism process to increase transparency and accountability in Ghana from the beginning and were able to achieve the good result” - summarised Beauty.

Mauricio Alarcón, Executive Director, Fundación Ciudadanía y Desarrollo, Ecuador talked about their experience in conducting a survey on Article 10 of UNCAC and the work they have been able to do thanks to a small grant received from the CSU.

The UNCAC is the only legally binding universal anti-corruption instrument, encourages States Parties to promote the active participation of civil society in the prevention and fight against corruption. More specifically, the UNCAC recognizes the role of civil society in combating corruption under Article 13, by calling on governments to increase transparency, improve public access to information and promote public contributions to the government decision-making process.

Best practices and challenges of civil society engagement in UNCAC were demonstrated during this side event. “Bringing together government, civil society and the private sector has made a difference in implementing UNCAC,” said Mirella Dummar Frahi, adding that “This is the only way to successfully fight corruption.”