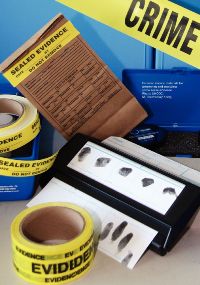 UNODC delivers a range of trainings to law enforcement officers on topics of relevance to fighting organized crime in their local contexts. It also employs modern technical training such as computer-based training as well as assistance in improving information exchange between law enforcement agencies, custom and border control authorities in different countries.

Criminal intelligence has been described as the lifeblood of the fight against transnational organized crime. It is the foundation for all proactive investigations and a cross-cutting issue since the same expertise and methodology is used for all serious crimes, including, corruption, drug trafficking,  and terrorism. A fundamental component of building law enforcement capacity involves enhancing understanding of how criminal intelligence works and how practically to develop, share and use it.

In order to operate internationally, individual Member States must have the capacity within their own law enforcement structures to collect, collate, analyze and disseminate information on criminals and the organizations within which they operate. UNODC is supporting criminal intelligence capabilities of law enforcement agencies through the provision of policy advice, assessment and gap analysis, and training of criminal analysts (including in using specialist analytical software), front-line law enforcement and policy makers, including through the use of a set of recently published criminal intelligence training manuals.

In this context, UNODC has published a series of criminal intelligence guides for managers, analysts and frontline law enforcement respectively, to serve as reference tools for law enforcement officials performing their respective roles, or to accompany and reinforce training courses in the discipline. Capacity building initiatives are supported by training that emphasizes the importance of international cooperation in the investigation of transnational organized crime.

Before a State can begin to respond to criminal threats, it must first understand them. Effective responses must be based on evidence as to the nature of organized crime and the extent to which organized crime groups affect States. The SOCTA Handbook (not link to get the guide) (Guidance on the use and preparation of serious organized crime threat assessments)  is a guide to preparing a national serious organized crime threat assessment.  Produced by UNODC in conjunction with Interpol, the SOCTA handbook represents the result of collaboration with dedicated law enforcement professionals, representatives of international and non-governmental organizations as well as academic institutions. The SOCTA handbook assists policy makers and managers to make better decisions about their responses to serious crime and provides practitioners with guidance on carrying out their own national threat assessments in line with international best practice.

In addition, UNODC supports the criminal intelligence capabilities for a growing number of regional coordination centers such as the Central Asian Regional Information and Coordination Centre for combating illicit  drug trafficking (CARICC) based in Tajikistan; the Joint Planning Cell (JPC) which is part of the Triangular Initiative; the Transnational Crime Units under the West African Coast Initiative (WACI) and the and the Gulf Council Intelligence Centre (GCIC), based in Doha.

The international community is increasingly concerned about the use of kidnapping by organized criminal groups. In the most severely affected countries, several hundred kidnappings occur annually.

Criminal groups are involved in kidnapping for the purpose of extortion, as a method of accumulating capital for other criminal activities, such as trafficking in firearms, money laundering, drug trafficking, trafficking in people and crimes related to terrorism. In its resolution 2002/16 of 24 July 2002, the Economic and Social Council vigorously condemned and rejected kidnapping in any circumstance for any purpose, and resolved to treat it as a serious crime, particularly when it was connected with actions of organized criminal or terrorist groups.

While definitional and recording problems make the crime difficult to assess the incidence of kidnapping at the international level, it is clear that States generally consider this crime to be a serious one. When committed by an organized crime group, the crime can be addressed in the framework of the provisions on mutual legal assistance and extradition of the  Organized Crime Convention.

Three interconnected recommendations that appeared appropriate in response to information-gathering efforts by UNODC, concern increased efforts to: (i) harmonize definitions and constituent elements of the crime; (ii) monitor the crime according to this common definition, and (iii) cooperate to exchange best practices to strengthen responses.

UNODC released a Counter-kidnapping Manual in 2006 aimed at providing authorities with guidance on preventing and investigating kidnapping cases. The manual is available upon request.

For more information, see the reports of the Secretary-General on 'International cooperation in the prevention, combating and elimination of kidnapping and in providing assistance to victims': E/CN.15/2003/7 and E/CN.15/2004/7.

Border control officials are often at the frontline of defense against organized crime and may be called upon to identify and apprehend criminals and protect and assist victims. It is therefore essential that border control officers be supported in their role as first responders.

UNODC's Border Liaison Officer (BLO) programme supports countries to better manage their borders and to better communicate with their counterparts on the other side of the same border. Specific activities and interventions within the BLO programme differ depending on the particular context and the funding available.  Often border officials are sparsely equipped, with limited resources with which to patrol borders and react when borders are breached. The BLO programme provides beneficiaries with technical resources (such as computers) and transport resources (such as motorbikes) with which to strengthen their responsive capacity. Additionally, the programme acts to build trust and dialogue between border staff on both sides of the border and strengthen communication between them so as to empower both sides to act and respond quickly to border threats.

The results of UNODC's BLO programme have included demonstrated improvement of border management through strengthened communication and collaboration between border agencies. Increased confidence and trust between personnel has lead to regular meetings between actors on both sides of the border, efficient information exchange and the development of joint operations, patrols and surveillance. This increased communication and collaboration in turn means that effective border management becomes self-sustaining. 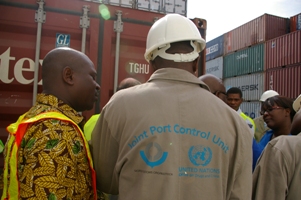 International trade is one of the significant contributing factors as well as by-products of globalization. Trade can significantly contribute to sustainable development though increased economic opportunities in movement of goods around the world.  However, many developing countries do not have the capacity to effectively harness the goods of international trade, while also ensuring trade security and standards at their ports, handling terminals and borders.

Although freight containers are an important part of the trade supply chain, they are used by organized criminals to traffic illicit drugs, precursor chemicals, weapons, explosives and other contraband. Where the trafficking of illicit goods through containers is not intercepted by law enforcement authorities, it fuels the commission of other serious crimes. For instance, trafficking of weapons and explosives raises concern about trafficking in containers being used directly or indirectly for terrorist attacks.

Through this programme, Joint Port Control Units, comprised of customs and police officers, are established at selected ports. Border guards, sea port authorities and other relevant agencies can also be beneficiaries of the programme. Staff are trained and equipped to identify and inspect high-risk freight containers with minimum disruption to legitimate trade and business. The Control Units have regular access to experts and specialist mentor services and are encouraged to forge partnerships and links with the trade and business community. A comprehensive basis for Joint Port Control Units is established for the exchange of information and intelligence and use of risk assessment and targeting techniques to identify high-risk consignments for law enforcement scrutiny, without hindering free flow of legitimate trade.

The programme further aims to promote the formation of alliances between customs, trade and enforcement communities as a means of collectively preventing the abuse of legitimate commercial trade for the purposes of organized crime.

Also see Tools and Publications and Contact Us for more information.