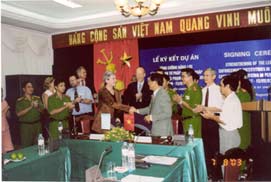 Hanoi (7 August 2003) – Today the Government of Viet Nam and the United Nations Office on Drugs and Crime (UNODC) signed a project document entitled “Strengthening of the Legal and Law Enforcement Institutions in Preventing and Combating Trafficking in Persons in Viet Nam”.

Under this new project, UNODC will work with the Government of Viet Nam to enhance the existing mechanisms against trafficking in human beings through facilitation of networking within law enforcement and the judiciary, increasing investigation and prosecution capacities and training of personnel of the agencies involved. Furthermore, UNODC will assist the Government in enhancing its responses to counteract trafficking in persons as a phenomenon of organized crime in the country.

Trafficking in persons is seen as an increasing phenomenon in Viet Nam and the two main destinations, which have emerged so far, are China and Cambodia. Although there is no accurate information available about the exact magnitude of the problem, the Government considers it to be one of the most serious crimes to be addressed.

Viet Nam’s Ministry of Public Security will assume a leading role in these anti-trafficking efforts together with the Ministry of Justice and the Surveillance Department of the Border Army under the Ministry of Defense.