Terrorism is a major challenge to the global community of nations. Acts, methods and practices of terrorism in all its forms and manifestations are activities aimed at the destruction of human rights, fundamental freedoms and democracy. The United Nation's Global Counter-Terrorism Strategy stresses the crucial role of respect for human rights and the rule of law as the fundamental basis of the fight against terrorism, including the need to promote and protect the rights of the victims of terrorism.

It is in this context that UNODC, together with Kenya's Director of Public Prosecutions, launched today a new manual on Human Rights and Criminal Justice Responses to Terrorism tailor made for Kenya.

"Human rights are at the foundation of UNODC's mission: making the world safer from drugs, crime and terrorism. Crime and terrorism prevention and criminal justice strategies must be founded on a human rights approach," said UNODC Regional Representative for East Africa, José Vila del Castillo, in his opening remarks.

The training manual examines human rights issues that arise in the course of the investigation, prosecution, trial and punishment of terrorism offences, through an analysis of the Kenyan law, as well as regional and international law. The numerous cases arising from Kenyan courts summarised in the manual show that Kenyan investigators, prosecutors, defence counsel and judges have been very actively grappling with the complex questions examined in the manual.

"The training manual will be used as a training and reference tool for investigators, prosecutors and judicial officers," explained the Deputy Director of Public Prosecutions, Dorcas Oduor. "It will promote a shared understanding of both the terrorism menace and of the need to strictly comply with the rule of law and in particular suspects' fundamental rights. During the investigation, prosecution and adjudication of terrorism cases, we must not forget the importance of gathering evidence in accordance with the dictates of the law."

The manual, developed with the financial support of the Government of Denmark, was developed with the input of Kenyan experts, including through two expert retreats drawing on the significant expertise of officials from the Joint Counter-Terrorism Analysis Centre, the Kenyan Anti-Terrorism, the Kenya Judiciary/Judicial Training Institute Police Unit, Kenya National Commission on Human Rights, Kenyan Office of the Director of Public Prosecutions, Kenya School of Law, Kenya Section of the International Commission of Jurists, University of Nairobi Parklands Law School and regional and international experts from the Intergovernmental Authority on Development Security Sector Program and the United Nations High Commissioner for Human Rights. 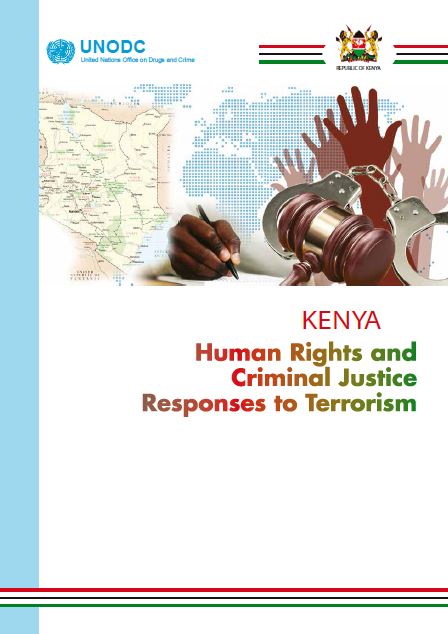