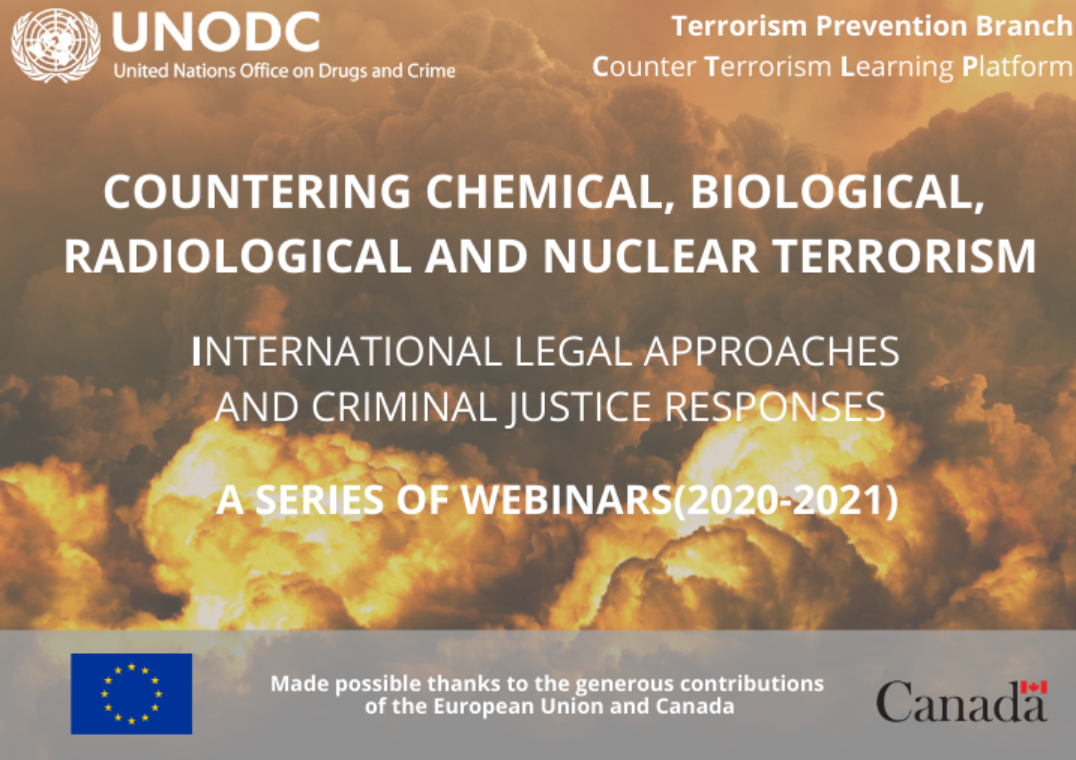 International legal approaches and criminal justice responses to the threat of chemical, biological, radiological and nuclear (CBRN) terrorism were the focus of a webinar series conducted by UNODC between 2020-2021.

The series aimed to strengthen the capacity of UN Member States in detecting and responding to the threat of non-State actors acquiring CBRN materials or weapons; to raise awareness on the international legal framework against CBRN terrorism; and to enhance capacities in investigating, prosecuting and adjudicating CBRN terrorism cases.

Emphasis was given to promoting implementation and enhancing knowledge of the International Convention for the Suppression of Acts of Nuclear Terrorism (ICSANT).

This convention is a key component of the international nuclear security architecture and aims at preventing and repressing nuclear terrorism by criminalizing illicit and unlawful acts involving radioactive material, radioactive devices or nuclear facilities.

The webinars, conducted by UNODC and invited experts from international organizations and national institutions, analyzed different aspects of ICSANT ranging from its criminalization provisions to its relationship with other relevant legal instruments, to national experiences with the implementation of the convention.

The last webinar of the series was delivered on 30 March 2021 and focused on mechanisms of international judicial cooperation in ICSANT and the other international legal instruments against nuclear terrorism. The event was opened by Ms. Anne Kemppainen, Head of the UN Section at the European Union (EU) Delegation to the UN in Vienna, who highlighted the importance of ensuring the safe, secure and sustainable use of nuclear energy and nuclear applications and the need to minimize the risk of access by non-State actors to CBRN materials and weapons of mass destruction, which constitutes a severe threat to international peace and security. Ms. Kemppainen reiterated the EU’s support to the universalization of the legal instruments against nuclear terrorism and praised UNODC for the work and technical assistance carried out in this regard. She underlined the central role played by international cooperation, including information sharing and the exchange of best practices.

The series of 13 webinars was delivered through UNODC’s Counter-Terrorism Learning Platform (CTLP) in different UN official languages (English, French and Spanish). The series gathered more than 300 practitioners from over 50 Member States and several international and non-governmental organizations.

The webinar series was made possible thanks to the financial support of the EU and the Government of Canada.