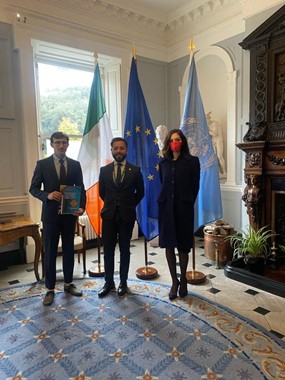 The International Convention for the Suppression of Acts of Nuclear Terrorism (ICSANT) contributes to a safer world by, inter alia, requiring its Parties to criminalize certain conduct involving nuclear or other radioactive material. Universalization and effective implementation of this Convention will ensure that there is no safe haven for alleged perpetrators.

As such, UNODC conducted a country visit to Ireland on 26-27 September 2022 to promote adherence to, and effective implementation of, ICSANT.

On the afternoon of 26 September, UNODC staff met with representatives from the Irish Department of Justice to discuss the treaty adherence process and previous efforts within the Irish Government related to adherence to ICSANT. UNODC staff also delivered a presentation on available technical assistance tools and briefed counterparts on UNODC’s legislative assistance services.

On 27 September, UNODC staff met with representatives from the Irish Ministry of Foreign Affairs and the Department of the Environment, Climate and Communications and briefed them on the main provisions of the Convention and on UNODC’s technical and legislative assistance.

UNODC also presented its ongoing work under a Canadian-funded project to develop a repository of implementing legislation related to ICSANT, the Convention on the Physical Protection of Nuclear Material (CPPNM) and its 2005 Amendment. The possibility of including Ireland’s relevant legislation in the repository was also discussed.

The visit took place under UNODC's three-year project, funded by the Government of Canada, to promote the universalization and effective implementation of ICSANT, CPPNM and its 2005 Amendment.