ICSANT at 15: High-level event commemorates anniversary of the Convention’s entry into force 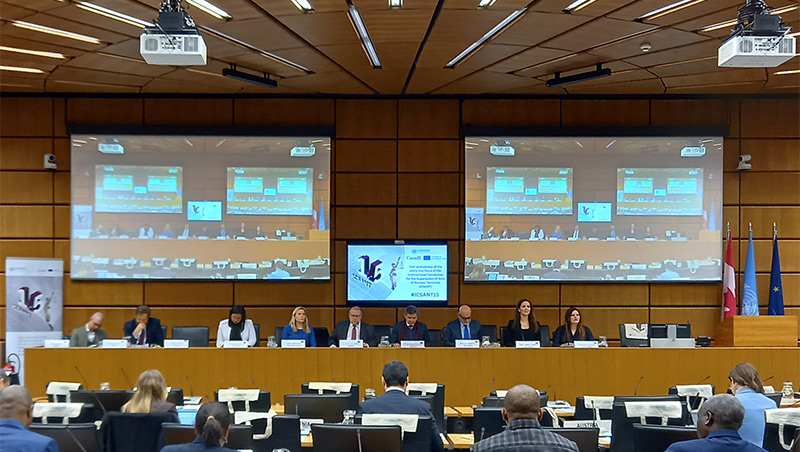 Vienna (Austria), 13 December 2022 – The risk of nuclear or other radioactive material being used for terrorist or other criminal purposes by non-State actors is one of the most serious threats of our time. As part of global efforts to address it, States must adhere to, and effectively implement, the international legal framework against nuclear terrorism.

The International Convention for the Suppression of Acts of Nuclear Terrorism (ICSANT) is a key instrument of this international framework, and an essential tool allowing States to strengthen their criminal justice systems.

The Convention entered into force in July 2007. It contributes to a safer world by requiring its parties to criminalize certain conduct involving nuclear or other radioactive material. For almost two decades, the United Nations Office on Drugs and Crime (UNODC) has been at the forefront of supporting Member States in these efforts.

To commemorate the fifteenth anniversary of the Convention’s entry into force, on 12 December 2022 UNODC, the Government of Canada and the European Union (EU) co-hosted a high-level event to discuss progress made since then, celebrate the Convention’s successes, and chart the future of promoting ICSANT and strengthening the global nuclear security architecture.

Addressing the event via video message, UNODC Executive Director Ghada Waly said: “I am convinced that by joining forces around our common legal framework we can more effectively prevent, and combat, nuclear terrorism.”

Ambassador Troy Lulashnyk, Canada’s permanent representative to the UN in Vienna, highlighted that this anniversary provides an important moment for reflection on further efforts and avenues through which parties can promote the universalization and effective implementation of ICSANT.

Effective tools that UNODC has developed to this end, including the ICSANT website launched by UNODC under EU funding, a manual on fictional cases related to offences established by this convention, and tailor-made e-learning modules and training materials, were emphasized by Marjoljin Van Deelen, EU Special Envoy for Non-Proliferation and Disarmament.

Other high-level speakers delivered remarks. Vladimir Voronkov, Under-Secretary-General of the UN Office on Counter-Terrorism, highlighted that Oman’s recent ratification of ICSANT brought the total number of States Parties to the Convention to 120. Voronkov stressed that work must continue for its universalization and effective implementation to be achieved.

Mariano Grossi, Director-General of the International Atomic Energy Agency (IAEA), emphasized that UNODC and the IAEA both do important work assisting Member States in strengthening and implementing their legal obligations, including by offering technical and legal assistance.

The Chief of the UN’s Office of Legal Affairs Treaty Section, David Nanopolous, referred to ICSANT as “a key component of the framework of 19 legal instruments to prevent terrorist acts.”

The event was moderated by Ambassador Juan Francisco Facetti, Permanent Representative of Paraguay to the UN in Vienna. Several countries (Angola, Ecuador and Saint Kitts and Nevis) shared their recent respective national experiences working with UNODC on ICSANT. Experts from civil society who also participated in the meeting represented organizations including the Nuclear Threat Initiative, Parliamentarians for Global Action, the Stimson Center and the Vienna Center for Disarmament and Non-Proliferation.

A recording of the event is available here.