Women and girls are more at risk to be killed at home, new UNODC and UN Women report on femicide shows 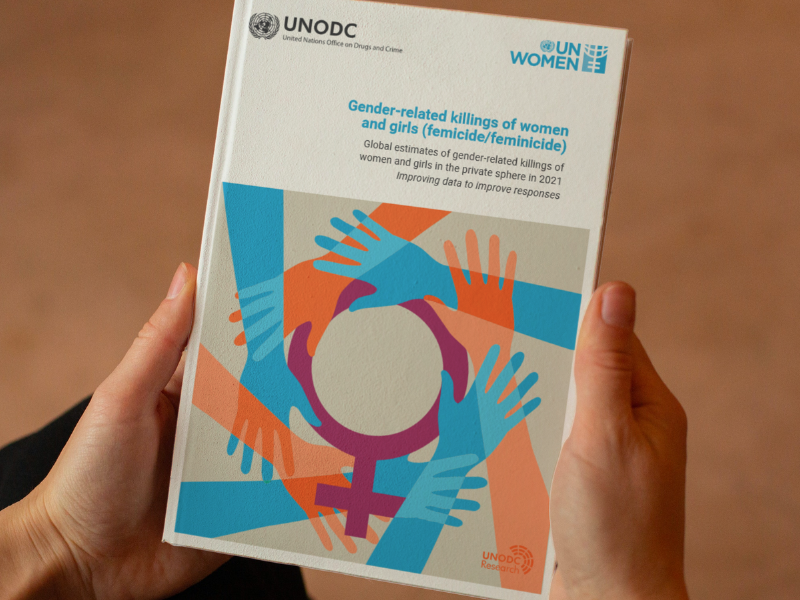 New York City (United States), 24 November 2022 – A new study by the United Nations Office on Drugs and Crime (UNODC) and UN Women shows that, on average, more than five women or girls were killed every hour by someone in their own family in 2021. The report comes ahead of the International Day for the Elimination of Violence against Women on November 25 and is a horrific reminder that violence against women and girls is one of the most pervasive human rights violations worldwide.

Of all the women and girls intentionally killed last year, some 56 per cent were killed by intimate partners or other family members (45,000 out of 81,100), showing that home is not a safe place for many women and girls. Meanwhile, 11 per cent of all male homicides are perpetrated in the private sphere.

UN Women Executive Director Sima Bahous said: “Behind every femicide statistic is the story of an individual woman or girl who has been failed. These deaths are preventable - the tools and the knowledge to do so already exist. Women’s rights organizations are already monitoring data and advocating for policy change and accountability. Now we need the concerted action across society that will fulfil women’s and girls’ right to feel and to be safe, at home, on the streets, and everywhere.”

UNODC Executive Director Ghada Waly said: “No woman or girl should fear for her life because of who she is. To stop all forms of gender-related killings of women and girls, we need to count every victim, everywhere, and improve understanding of the risks and drivers of femicide so we can design better and more effective prevention and criminal justice responses. UNODC is proud to launch the 2022 femicide study with UN Women to galvanize global action and salute the efforts of women’s rights organizations around the world to end this crime.”

Globally, an estimated 81,100 women and girls were killed intentionally in 2021. The overall number of female homicides has remained largely unchanged over the past decade. This underscores the urgency for stronger actions with which to prevent and respond to this scourge.

Even though these numbers are alarmingly high, the true scale of femicide (referring to the killing of women simply because they are women) may be much higher, as too many victims of femicide still go uncounted. Given inconsistencies in definitions and criteria among countries, for roughly four in ten women and girls killed intentionally in 2021, not enough information is recorded to identify the killings as femicide, especially if they happen in the public sphere.

As for regional disparities, while femicide is a problem that concerns every single country in the world, the report shows that in absolute numbers, Asia recorded the largest number of gender-related killings in the private sphere in 2021, whereas women and girls were more at risk of being killed by their intimate partners or other family members in Africa. In 2021, the rate of gender-related killings in the private sphere was estimated at 2.5 per 100,000 females in Africa, compared with 1.4 in the Americas, 1.2 in Oceania, 0.8 in Asia and 0.6 in Europe. At the same time, the findings suggest that the onset of the COVID-19 pandemic in 2020 coincided with a significant increase in gender-related killings in the private sphere in Northern America, and to some extent in Western and Southern Europe.