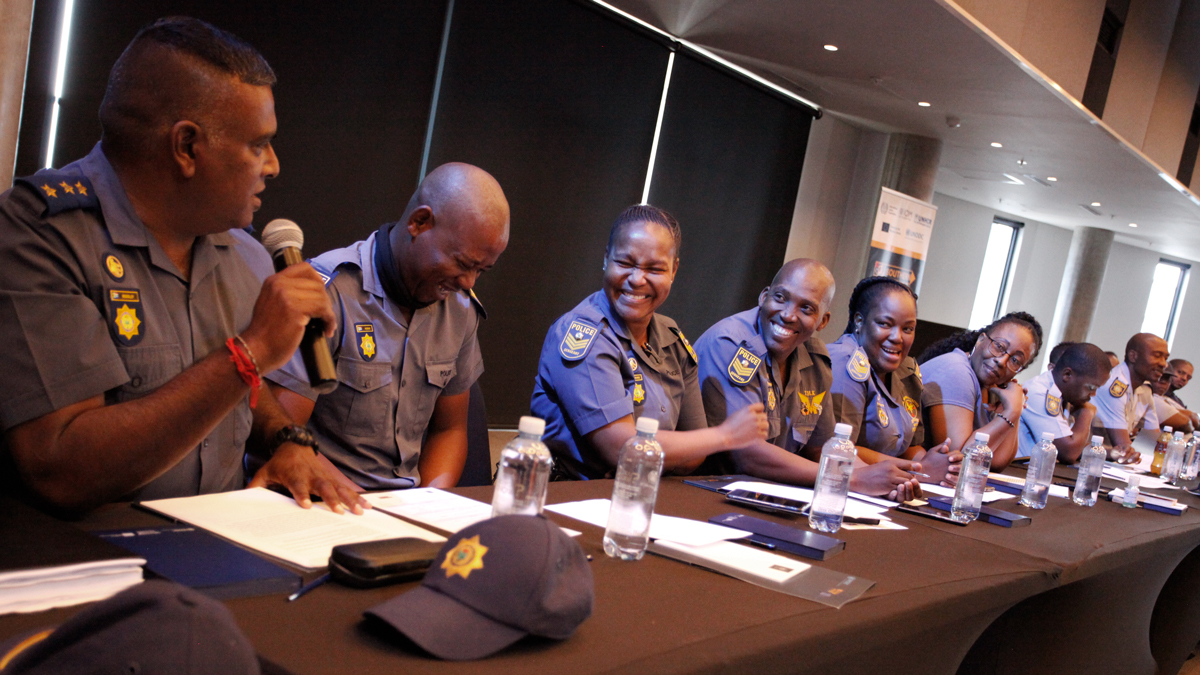 Pretoria (South Africa), 16 January 2023 – The police in Johannesburg had a lead – a real chance to uncover human trafficking victims. But despite the clear information leading them to a house in a suburb of the city, the police could not find where the victims were being held.

Some patience, persistence, and careful surveying of the house eventually paid off, however, with a startling discovery. Apparently, the traffickers owned two neighbouring houses connected via tunnel – where the victims were indeed hidden.

In another instance, the South African police had rescued ten Asian women from sexual exploitation, also in Johannesburg. The women were relieved at the prospect of being repatriated to their respective homes in Asia. But when one of them phoned her mother en route to say she was coming home, her mother warned: “Do not come home; the people from South Africa [i.e., the traffickers] are here waiting for you.”

These anecdotes were relayed in Johannesburg by Colonel Parmanand Jagwa, the national coordinator of the fight against human trafficking in the Hawks, the South African police’s elite crime fighting unit. Speaking in early September 2022 at the start of a series of training sessions aimed at building capacity among law enforcement agencies in South Africa on tackling human trafficking and migrant smuggling, Jagwa emphasized that human traffickers were not ordinary criminals. Rather, he stressed, they are dangerous members of effective and organized syndicates who do their research.

During the trainings, law enforcement officers were encouraged to adopt a “victim-centred approach” rooted in the care and welfare of victims, rather than treating them as criminals themselves. Compassion, they were informed, also builds a relationship of trust that would be critical in enlisting the victims’ cooperation in the investigation meant to bring the criminals to justice.

South Africa is a preferred country of destination for different classes of migrants, including smuggled migrants, many of whom are brought in by organized syndicates. However, numbers are not readily available due to various reasons, including a limited capacity to collect data. Thus, trafficking in persons is usually deflected as kidnapping, rape and gender-based violence – all highly prevalent in South Africa.

During the training, Major General Ebrahim Kadwa, head of the Hawks in Gauteng province (where both Pretoria and Johannesburg are located) referred to young children working in disused mine shafts, pulling out whatever gold they could find there. Most of them are believed to be foreign nationals.

“The questions being asked are: How did they get here? Who brought them here? Are they trafficked? Is it just a pure question of unemployment and extreme poverty that are the push and pull factors bringing them to South Africa?” However, Kadwa also urged police officers not to lose sight of in-country trafficking that is happening “in plain sight”. One possible sign was in the prevalence of brothels in some areas of Johannesburg.

Commenting on the upskilling of law enforcement officers, UNODC crime prevention and criminal justice officer Jeptum Bargoria said the ongoing series of trainings will reach officers in the different provinces. “It is when law enforcement officers are given the requisite support and skills that we will see further improvements in the prosecution of those involved in human trafficking and migrants smuggling,” she added.

The training for law enforcement officers was organized under the Southern Africa Migration Management (SAMM) project which is funded by the European Union and is a collaboration of four UN agencies: UNODC, the International Labour Organization, International Organization for Migration and the United Nations High Commissioner for Refugees, under the one-UN model. The overall objective is to improve migration management in the Southern Africa and Indian Ocean region.

The UNODC Global Report on Trafficking in Persons provides an overview of patterns and flows of trafficking in persons at global, regional and national levels. As UNODC has been systematically collecting data on trafficking in persons for more than a decade, trend information is presented for a broad range of indicators. Released biannually, the latest edition of the report will be launched on 24 January 2023.

Further information on UNODC’s work to counter trafficking in persons and smuggling of migrants is available here.