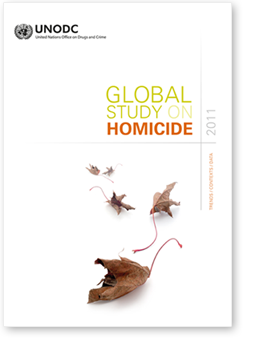 The 2011 Global Study on Homicide has been conceived to provide a unique overview of the ultimate crime. The picture it paints is of a phenomenon marked by large disparities in distribution, demographics, typologies and mechanisms.

At one extreme, where homicide rates are high and firearms and organized crime in the form of drug trafficking play a substantial role, 1 in 50 men aged 20 will be murdered before they reach the age of 31. At the other, the probability of such an occurrence is up to 400 times lower.

There are many reasons for this but one of the links most clearly identified in this study is that homicide is much more common in countries with low levels of human development, high levels of income inequality and weak rule of law than in more equitable societies, where socio-economic stability seems to be something of an antidote to homicide.

Disparities not only exist in homicide typologies but also in their prevalence in different regions and countries, yet this study shows that intimate partner/family-related homicide is a chronic problem everywhere. Women murdered by their past or present male partner make up the vast majority of its victims worldwide, which explains why in many countries women are more likely to be murdered in the home than elsewhere.

It is the comprehensive cross-national and time series homicide data from 207 countries and territories, forming the backbone of the Global Study on Homicide, which has enabled the extensive multi-national team behind it to come to such concrete conclusions. Analysis of this nature is fundamental in understanding the forces that drive homicide so that measures and policies can be developed to help bring about its reduction.

See the data at: