CRIMJUST & Global Firearms Programme held a Side Event in the Margins of  The Commission on Narcotics Drugs.

16 March 2017 - UNODC CRIMJUST & GLOBAL FIREAMS PROGRAMME organized a join side event to raise the question of "Links between illicit drug trafficking and illicit firearms trafficking - Towards an integrated approach - Experiences from UNODC and Member States "at the UNODC Headquarters in Vienna. 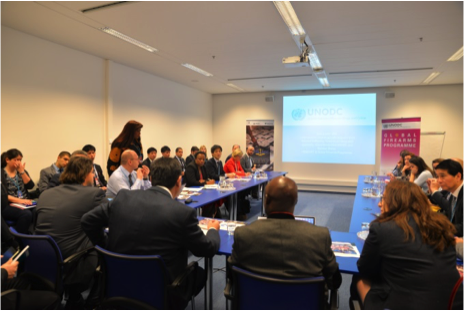 The links between the illicit drug trafficking and the illicit firearms trafficking as well as the need for an integral and balanced approach to these often interconnected phenomena have been acknowledged by the international community on different occasions (Resolution 51/11 (2008) of the Commission on Narcotic Drugs, entitled "Links between illicit drug trafficking and illicit firearms trafficking"; Resolution 2195 (2014) adopted by the Security Council"; 2016 the Outcome Document of the United Nations General Assembly Special Session (UNGASS) on the world drug problem, entitled "Our joint commitment to effectively addressing and countering the world drug problem").

Through this side event attended by over 50 participants, CRIMJUST, funded by European Union Cocaine Route Programme, and the UNODC Global Firearms Programme aimed jointly at exploring to which extend the phenomena of drug trafficking and firearms trafficking are related/interconnected and impact on each other. An integrated approaches was explored to address these threats.

During the opening remarks Mr. Tofik Murshudlu, Chief of Implementation Support Section, highlighted that as reported by many countries, drugs and firearms trafficking entails the involvement of the same criminal groups, intermediaries and similar routes. Adding that some countries also reported that firearms traffickers would usually be involved primarily in drug trafficking and smuggled firearms to protect the "business model".

Experts from Brazil, Mexico and Nigeria were invited to share their current national situation regarding drug trafficking and firearms trafficking, demonstrating the concrete examples on how the two illicit flows of drugs and firearms are interconnected in the three countries. Their insight on best practices and strategies for an integrated approach were welcomed and valued. On the UNODC side Marco Teixeira, CRIMJUST Coordinator and Simonetta Grassi, Head of the Global Firearms Programme had the opportunity to share possible next steps on building synergies among both programmes: to increase the level of research on the "business models" of narco-groups involved in firearms trafficking and to develop an integrated approach that focuses on the criminal networks and not on the commodities.

Information and findings from the national experiences of participating countries will help draw conclusions and shape recommendations, as well as the findings of the work of UNODC through its CRIMJUST Programme and its Global Firearms Programme, and other UNODC research reports. Identifying links between drug trafficking and other forms of illicit trafficking remain a challenge in order to better disrupt criminal networks from a global perspective.