27 July 2022 – In light of a transnational high-volume seizure off the coast of Cape Verde involving a suspected organized crime group, UNODC under the framework of CRIMJUST  set up an Investigative Case Forum between prosecutors and investigators from Brazil, Cape Verde and Spain. This forum aimed to promote regional and interregional cooperation with a view to strengthening criminal investigations within the participating countries and explore the possibilities of conforming a Joint Investigation Team to support the identification and disruption of the transnational criminal network involved in this seizure. 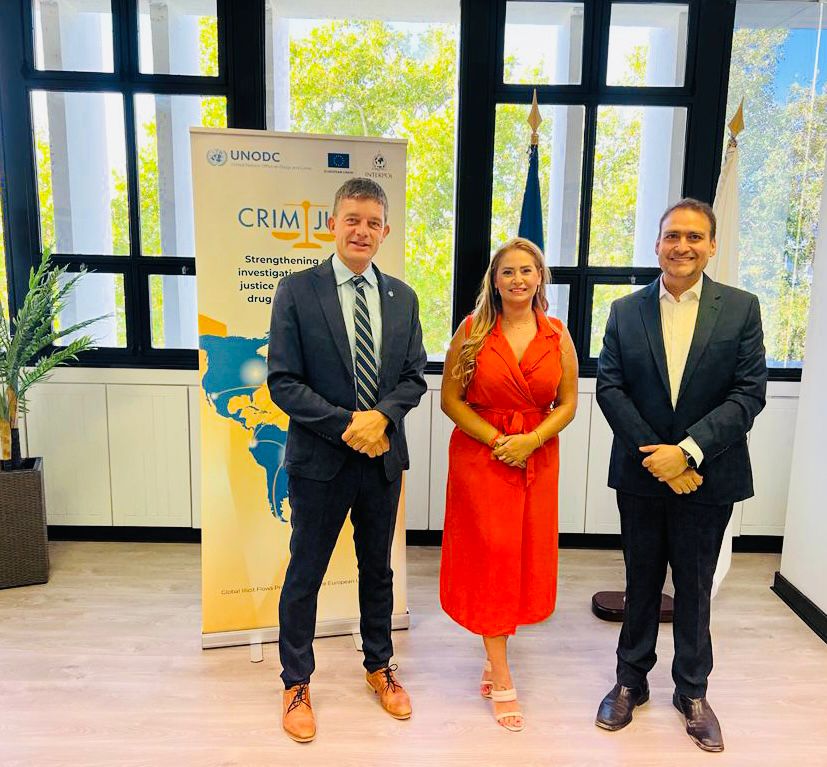 The West African coast is known to be a major transit route for cocaine from Latin America to Europe and, according to 2020 UNODC World Drug Report, countries of West and Central Africa reported in most years over the last two decades the largest cocaine seizures in Africa, accounting for almost two thirds of all cocaine seized in Africa.  In alignment with this trend, Cape Verde has reported significant seizures in the past few years. To strengthen cross-border criminal justice cooperation, CRIMJUST continues to facilitate interregional investigative case forums, thus providing a trusted platform for officials to establish operational contacts and to build trust, exchange of intelligence and evidence to develop post-seizure investigative actions.

This forum was organized on the back of a seizure of 5.668 kilos of cocaine on board of a Brazilian fishing vessel that was intercepted in the port of Praia, Cape Verde, in April 2022. Cape Verdean authorities, in collaboration with the Federal Police of Brazil, the US Drug Enforcement Administration, the United States Navy and the UK National Crime Agency, conducted an operation that led to the arrest of the 7 individuals on board of the vessel.

The event was inaugurated by CRIMJUST’s Official, Antonio Valverde, who welcomed participants and introduced them to the Programme’s Investigative Case Forum methodology as well as stressed the importance of looking beyond national borders when implementing counter-narcotic strategies due to the transnational nature of organized crime. CRIMJUST partners, including the Maritime Analysis and Operations Centre - Narcotics (MAOC), and, the Portuguese Judicial Police participated in the forum. MAOC underscored the importance of enhancing criminal intelligence and law enforcement actions on the high seas, to effectively target maritime drug trafficking.

Over the course of two days, officials exchanged information and intelligence in regards to the case. The participants articulated how the April operation took place, its results, and their plans for further investigative actions as well the state of the ongoing prosecution of the individuals arrested. MAOC contributed still with an overview of its capabilities and the support it can provide to the participants, especially related to the targeting of vessels. All delegations went on to discuss how to best develop further investigation actions, identify other linked criminal actors and how to identify and target financial flows associated with the seizure. Upon a further plenary discussion on evidence-sharing and the possibility of conforming Joint Investigation Teams, the forum was concluded with agreements on the follow-up actions to be taken in order to advance of the investigations and prosecution on all jurisdictions.

As the volume of illicit flows and related seizures continues to rise in the transatlantic route from producing South America, the transit countries in West Africa all the way to consumer markets in Europe, this forum has delivered a highly impactful result, strongly deepening interregional ties and cooperation between investigators and prosecutors from all three relevant regions

CRIMJUST is funded by the European Union and by the US Bureau of International Narcotics and Law Enforcement Affairs (INL). It seeks to enhance law enforcement and judicial counter-narcotic strategies beyond interdiction activities and to foster transnational responses targeting each stage of the drug supply chain.