October 2020 - The CRIMJUST Global Programme, funded by the European Union under the framework of the “Global Illicit Flows Programme”, in partnership with the Ibero-American Network of Anti-Drug Prosecutors (RFAI) of the AIAMP and the  Network of Anti-Drug Prosecutors of CPLP (Comunidade dos Países de Língua Portuguesa) delivered two online activities for Lusophone countries, a training on “Promoting Cooperation on Controlled Deliveries to Tackle Transnational Drug Trafficking” from 6 to 9 October 2020, as well as a webinar on New Psychoactive Substances (NPS), synthetic drugs and precursors on 15 October 2020.

The training on “Promoting Cooperation on Controlled Deliveries to Tackle Transnational Drug Trafficking” sought to strengthen the investigative and analytical capacities of law enforcement and judicial officials. A total of 41 prosecutors and law enforcement officials from Brazil, Cape Verde, and Portugal, attended – 12 of which were women. During the training, experts from the RFAI and CPLP networks of anti-drug prosecutors discussed the use of this special investigative method as a key facilitator to trace and disrupt the drug supply chain, as well as underscored the critical role played by cross-border cooperation between law enforcement and judicial officials to effectively identify and prosecute responsible transnational organized crime groups.

During the training, Ms. Ana Cristina Andrade, UNODC Programme Officer in Cape Verde, first presented the scope of CRIMJUST, explaining its various initiatives and its work in promoting international cooperation. Her presentation was followed by sessions from three prosecutors from Portugal, Cape Verde and Brazil outlining the specificities of their national legislations with regards to controlled deliveries as well as an overview of relevant international conventions. These theoretical presentations were followed by a series of sessions presenting case studies of controlled deliveries by sea, air and land. Additional discussions shed light on the observed changes in drug trafficking trends in the wake of the COVID-19 crisis. All panels were followed by Q&A sessions which offered to participants, who interacted with experts, the opportunity to clarify remaining doubts and share their experiences. 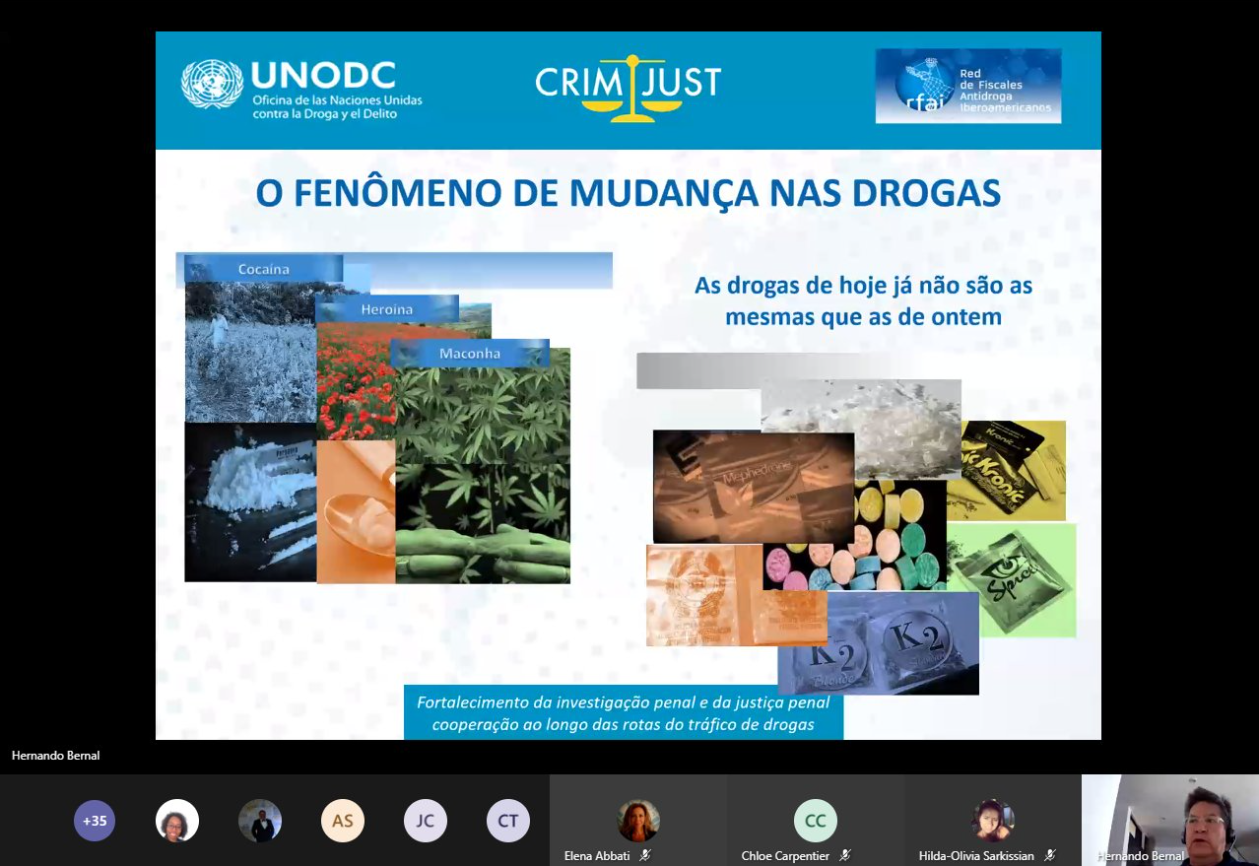 In addition, CRIMJUST, RFAI, the CPLP network of anti-drug prosecutors, and the Research and Analysis Branch, joined efforts to deliver a two-hour webinar outlining current and emerging trends, from routes, modus operandi, actors and substances, characterizing the markets of New Psychoactive Substances (NPS), synthetic drugs and precursors. Two presentations were delivered by Ms. Chloe Carpentier, Chief of the Research and Analysis Branch and by Mr. Hernando Bernal Contreras, expert at the Integrated System for Illegal Crop Monitoring (SIMCI) respectively. Around 42 persons attended this webinar from across Lusophone countries including São Tomé and Principe, Brazil, Guinea-Bissau, Mozambique, Portugal, Timor Leste and Cabo Verde.

These CRIMJUST activities were funded by the European Union under the framework of the "Global Illicit Flows Programme" [GIFP]). They join existing efforts to enhance law enforcement and judicial counter-narcotic strategies beyond interdiction activities and to foster transnational responses targeting each stage of the drug supply chain.