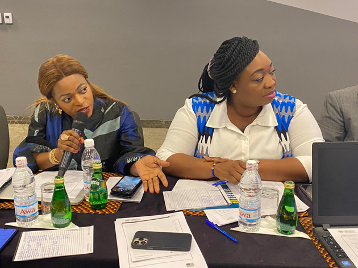 Recognizing the added complexities and challenges associated with transnational drug investigations, this training, set over five days, will walk participants through a mock international drug investigation, starting from intelligence gathering and ending at prosecution and asset confiscation, to strengthen institutional capacities of Cote d’Ivoire to carry out cross-border investigations and to utilize appropriate international cooperation mechanisms and prosecution procedures in cases targeting transnational organized crime.

This training marks both the launch and the first capacity-building activity organized as part of the CRIMJUST-West Africa project, implemented by the United Nations Office on Drugs and Crime (UNODC) and funded by the Bureau of International Narcotics and Law Enforcement Affairs (INL) of the U.S. State Department. This project, initiated in October 2021, will be implemented over three years and will support Togo, Cote d’Ivoire and Benin to develop greater technical capacity to detect, investigate and prosecute transnational drug trafficking cases in line with Human Rights.

In Cote d’Ivoire, CRIMJUST-West Africa will provide targeted support to a specialized pool of magistrates, the Pôle Pénal, économique et financier. Established in January 2020 by the Ministry of Justice and Human Rights, this specialized pool of magistrates provides Cote d’Ivoire with a stronger institutional and legal framework to prosecute serious and complex crimes. Under CRIMJUST, INL and UNODC, in close consultation with the Ivoirian judicial authorities, are looking to support this effort by contributing to the specialization of the Pole’s magistrates as well as by streamlining inter-regional criminal justice cooperation actions.

This strategic partnership between UNODC and INL comes in the wake of a series of major drug seizures in the region pointing to heightened risks of organized crime in West Africa. In Cote d’Ivoire alone, authorities have reported a rise in cocaine seizures over the past couple of years, including the  seizures of 411 kg of cocaine off the coast of Abidjan in February 2020, of 1,056 kg of cocaine in February 2021, of 6 tonnes of cocaine in the Gulf of Guinea in March 2021 and of 2 tons and 57 kg in San Pedro and Abidjan in April 2022 to name a few.

This increase in seizures has mirrored the region’s growing integration into the global economy, suggesting organized crime groups are exploiting improved transportation infrastructure and greater access to technology in West Africa, to mass produce and traffic drugs transnationally. This resurgence of illicit trafficking in the region poses new risks to governance, public security and economic development and calls for stronger international criminal justice cooperation to build fair, robust and coordinated responses.