With the support of the European Union, UNODC donates narco-testing kits and presents course on Asset Forfeiture for the FELCN of Bolivia

10 June 2021- Thanks to funding provided by the European Union in Bolivia, the United Nations Office on Drugs and Crime (UNODC) donated equipment and provided a course on Asset Forfeiture to the Special Force against Drug Trafficking (FELCN), which will strengthen the fight against the transnational crime of illicit drug trafficking in the Plurinational State of Bolivia. 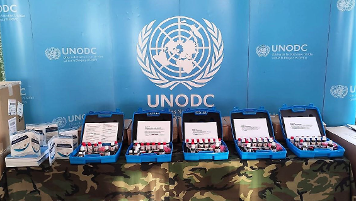 The course on Asset Forfeiture, aimed to the FELCN, will help to strengthen, and develop knowledge on asset forfeiture as a Legal Institute and on the Action of Loss of Ownership in Bolivia, and is aimed at investigators, whose work activities are related to this topic. The participants of the course will be able to strengthen their knowledge to make strategic decisions in the different stages of the investigation and jurisdictional process. The course has been developed within the framework of the Global CRIMJUST Project "Strengthening criminal investigations and criminal justice cooperation along drug trafficking routes" (CRIMJUST), and the UNODC Support Program for the National Strategy to Combat Drug Trafficking and Reduce Excessive Coca Cultivation, both funded by the European Union. 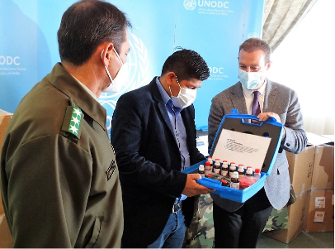 In his speech, the UNODC Representative in Bolivia, Thierry Rostan, said: "As we had expressed in the presentation of the report on the validation of information on drug destruction, we try to provide the means for compliance with the recommendations we issued. A few weeks ago, we provided scales and biosafety supplies to the FELCN and now we complete our support with the narco-testing kits. These tools, scales and kits can be used at the time of seizure of controlled substances, as well as in their verification before their destruction". He emphasized that UNODC will continue to support the Bolivian government with the same energy and respecting its independence.

The Minister of Government, Carlos Eduardo Del Castillo Del Carpio, thanked UNODC for the donation of the drug test kits and emphasized that international cooperation is fundamental to achieve the Bolivian objectives against drug trafficking. As for the course on asset forfeiture, he said it will allow police officers to make strategic decisions to use the seized goods and assets. He also mentioned that the Bolivian government is working on a new Asset Forfeiture law to make it more expeditious and less bureaucratic. At the end of his speech, he requested the help of UNODC through its experts to improve the law.

UNODC recognizes the efforts of the Plurinational State of Bolivia in the fight against drugs, that is being carried out in the country, and requests the Bolivian authorities and the international community to continue strengthening these efforts. "We will continue to support the policies and actions of the Plurinational State of Bolivia in its fight against illicit drug trafficking, with the same commitment. And we are grateful for the financial support of the European Union, without this support, this donation and the Specialized Course would not have been possible," concluded Rostan.

This CRIMJUST initiative was funded by the European Union under the framework of the "Global Illicit Flows Programme" [GIFP]). They join existing efforts to enhance law enforcement and judicial counter-narcotic strategies beyond interdiction activities and to foster transnational responses targeting each stage of the drug supply chain.