Workshop provides insight on role of women in illicit networks 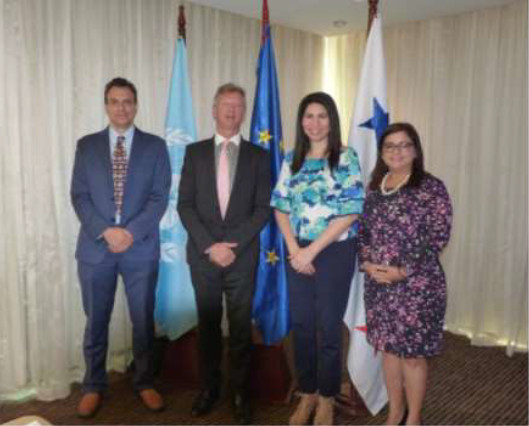 March 9 - On International Women's Day 2019, CRIMJUST, in partnership with the Government of Panama, and supported by the EU, organized a workshop for 19 members of the Panama judicial and public defense system and ministries to discuss the role and effects of organized crime on women.

EU Head of Delegation of Panama, Mr. Chris Hoornaert opened the session by reiterating the EU's commitment to fighting gender inequality and to building a fairer political and legal system. Although the rights of women and girls are today better protected and enforced than in the past in many areas of the world, women continue to disproportionately suffer from gender-based violence and discrimination worldwide. Likewise, rates of unemployment and of poverty are higher among women than men. This has had significant implications for the role and place of women in illicit trafficking networks. Not only are they the main victims of trafficking, they have also taken on important roles in drug trafficking networks. According to the 2018 World Drug Report, between 2012 and 2016, some 10% of the global penitentiary population were women convicted of a drug-related crime. Moreover, most national judicial systems are written and enforced by men causing many gender-specific concerns, vulnerabilities and / or situations to be overlooked.

In this light, the CRIMJUST workshop provided an opportunity for participants to discuss the state and consequences of gender roles and inequality in the drug trade, notably reflecting on the role of social media in preventing GBV. Indeed, illicit trafficking presents an opportunity for many women to climb the social ladder, providing a lucrative source of income. At the same time, the inherent lawlessness of the trade creates a permissible environment for violence, discrimination and exploitation to thrive. During the workshop, participants underscored the need to improve women's socio-economic status, the difficulties of reporting domestic violence and the increasing participation of women in illicit trafficking. Attendees recognized the potential of social media in raising awareness around gender-based violence as well as for the need to foster international synergies to push forward the Sustainable Development Goal 5: " Achieve gender equality and empower all women and girls". They further called for more, and better quality, quantitative and qualitative studies highlighting the dire need for precise and comprehensive statistics in order to formulate relevant policies.

This workshop, organized as part of the larger "Consolidation of the Criminal Procedure Reform in Panama" (PANZ41), allowed the UNODC and the EU to reiterate their commitment to improving women's rights, promoting female empowerment and to tackling gender-specific issues brought about by illicit trafficking, especially in Latin America.