The Near and Middle East has reported high levels of amphetamine seizures in recent years. Reports of amphetamine seizures from countries in the Middle East continue to refer predominantly to tablets bearing the Captagon logo. The nature of the psychoactive ingredients in such tablets is not always clear, but reports suggest that amphetamine trafficked from South-East Europe is the main ingredient in Captagon tablets found in the consumer markets of the Middle East (notably Saudi Arabia), frequently alongside caffeine. Laboratories may also exist in countries along this route, possibly carrying out the conversion into tablet form. Jordan, Lebanon, Turkey and the Syrian Arab Republic serve as important transit points. Moreover, Turkey is a prominent transit country for heroin. In North Africa, large seizures of cannabis herb are reported from Morocco. 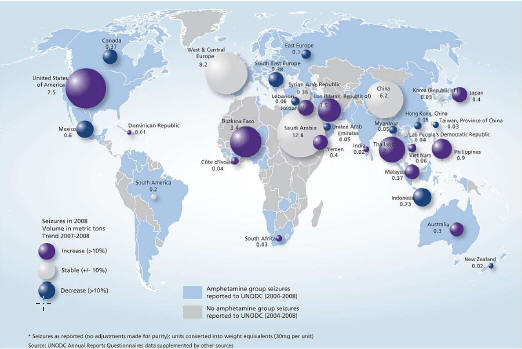 The Arab region comprises three diverse and culturally distinct geographical areas, namely the Middle East region, the Maghreb and the Gulf States. Across these three sub-regions are displayed considerable disparities and differences in levels of development, economics, politics, legal systems and culture. National capacities, capabilities and treaty adherence relevant to UNODC's mandates and operations vary from country to country.

Moreover, this is a region that has a number of conflict, post-conflict and fragile states, namely the ongoing conflict between Israel and the Palestinian Authority, the continuing instability in Iraq and Sudan, particularly Darfur, which contribute to an environment of violence and unrest both in those countries themselves, but also with considerable negative consequences on neighbouring countries in the region.

Throughout the region, the need to strengthen governance, insecurity, conflicts, poverty and economic disparities among and within countries of the region are providing opportunities for transnational organized crime, as is reflected in increasing incidences of illicit trafficking in drugs, persons, money, and arms, and the consequential generation of proceeds of crime and acts of money‐laundering.

Due to its strategic location and comparatively weak control measures in some of the countries in the region, illicit activities related to the trafficking of drugs and crimes associated with it, firearms and human beings and migrant smuggling are expanding in the region, and bringing increasing profits to international and local criminal organizations. Indeed the drug and crime control problems are becoming more and more prominent in the region, and have the potential to escalate considerably if countermeasures are not strengthened now, and a clear message is not sent, particularly against trafficking of drugs, human beings and smuggling of illegal migrants and terrorism. HIV/AIDS, which was not previously a particularly prevalent problem in the MENA region, is now increasing, particularly amongst injecting drug users and in the prison settings. The situation is further aggravated due to the inadequate performance of the criminal justice system.

The draft Regional Programme on Drug Control, Crime Prevention and Criminal Justice Reform 2011-2015, a draft Political Declaration (the Cairo Declaration) and draft Terms of Reference for a Regional Programme Steering and Follow-Up Committee were reviewed and further developed at a Regional Expert Meeting held in Cairo from 27 to 29 April 2010 (in partnership with the League of Arab States and the Government of Egypt) with expert delegates from the Ministries of Interior, Justice and Health from all 18 countries in the region, namely Algeria, Bahrain, Egypt, Iraq, Jordan, Kuwait, Lebanon, Libya, Morocco, Oman, Palestinian Authority, Qatar, Saudi Arabia, Sudan, Syria, Tunisia, the United Arab Emirates and Yemen.

UNODC is currently engaged in several regional cooperation programmes as well as national and country programmes throughout the region. Such programmes include combating illicit trafficking through: