Vienna, Austria, 14 October 2020 – At the margins of the tenth session of the Conference of the Parties to the United Nations Convention against Transnational Organized Crime, UNODC’s Global Firearms Programme organized a high-level side event on “Celebrating the 15th Anniversary of the Entry into Force of the Firearms Protocol: Time for Universalization and Effective Implementation”, which gathered approximately 150 people from around the world.

The web-based side event was opened by UNODC’s Executive Director, Ms. Ghada Waly, and by Ms. Floriana Sipala, Head of the Organised Crime & Drugs Policy Unit, Directorate-General of Migration and Home Affairs of the European Commission (DG HOME). Two expert panels with representatives from different countries and institutions, as well as academia and civil society organizations, discussed the potential and universalization of the Firearms Protocol, as well as its effective implementation and links to the Organized Crime Convention. The event was moderated by Mr. Tofiq Murshudlu, Head of the Implementation Support Section of UNODC’s Organised Crime and Illicit Trafficking Branch.

Celebrating 15 Years of the Firearms Protocol

During the high-level opening UNODC’s Executive Director, Ms. Ghada Waly, reminded that the Firearms Protocol was “the principal global legally binding instrument to address illicit manufacturing of and trafficking in firearms, their parts and components and ammunition, and is the only international legal instrument that requires its States parties to establish these conducts as criminal offences”. Ms. Waly also recalled that “the international community can do more to encourage States to accede and promote effective national-level implementation” and called upon States to double their efforts to accede to and implement the Firearms Protocol. 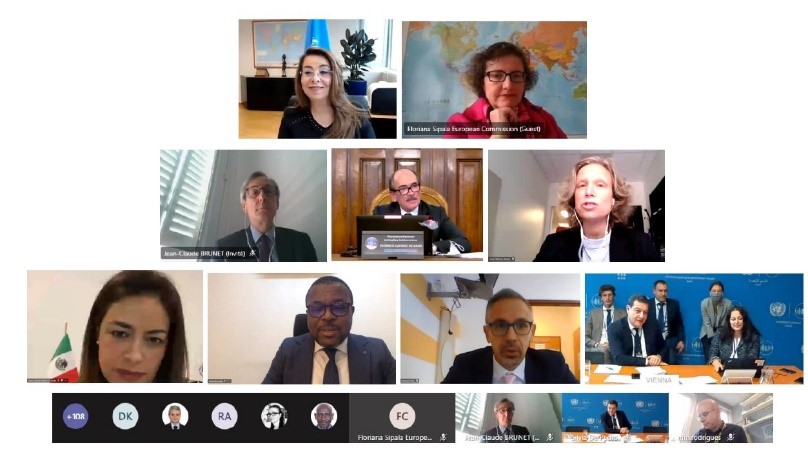 On the other hand, Ms. Sipala, highlighted that European Union itself joined the Firearms Protocol as a party, and that the EU internal legislation has been profoundly influenced by the provisions of the Firearms Protocol. She also emphasised the importance of gaining a better understanding of the often-hidden phenomenon of illicit firearms trafficking in order to make intelligence-based decisions. She emphasized that the European Commission has been supporting the activities of the Global Firearms Programme since its creation in 2011 and stressed that the EU is a strong partner of UNODC in the fight against illicit firearms trafficking and related crimes across the globe.

The first thematic panel focused on the universalization and effective implementation of the Firearms Protocol. In that regard, French Ambassador-at-large on transnational criminal threats and the fight against the illicit trafficking in Small Arms and Light Weapons (SALW), Mr. Jean-Claude Brunet, reminded of the need to foster synergies between the existing instruments at regional and international level to effectively prevent and combat the illicit firearms flows as well as the diversion of firearms. In that regard, he highlighted the importance of the Firearms Protocol as a basis to develop legislation on this issue. To ensure its effective implementation, he emphasised the importance of strengthening inter-ministerial cooperation. 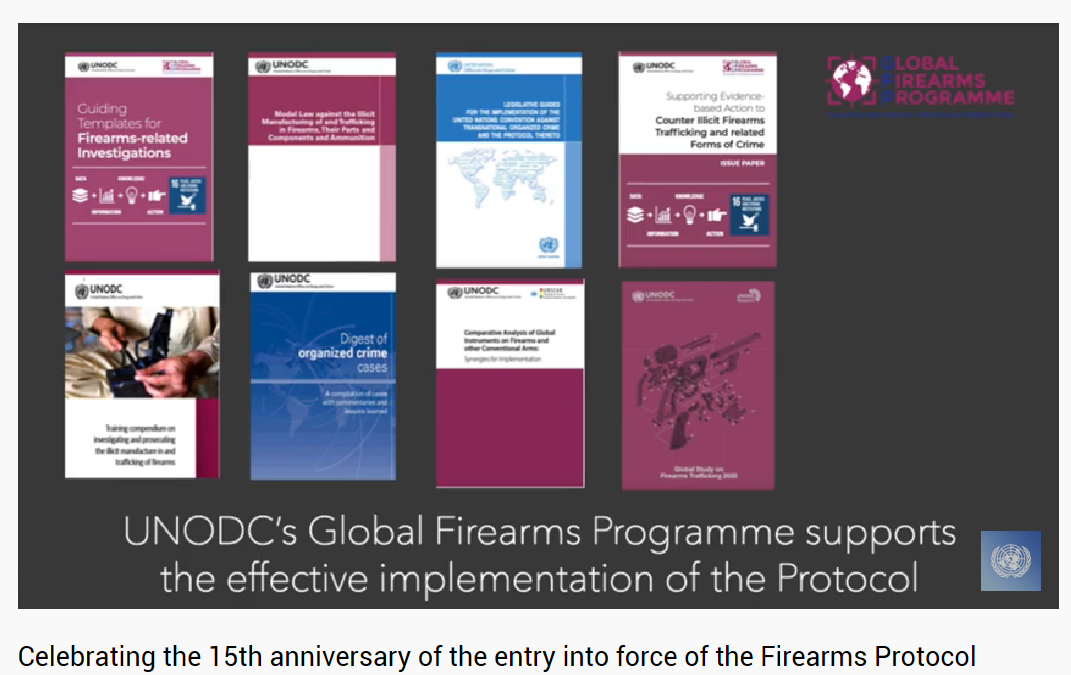 Following his intervention, Mr. Federico Carfiero de Raho, Italy’s National Anti-Mafia and Counter-Terrorism Prosecutor, referred to the Protocol as a cornerstone and universal model to facilitate and strengthen cooperation between States parties to prevent, combat and eradicate the illicit manufacturing of and trafficking in firearms, their parts and components and ammunition. He further recognized a frequent a lack of thorough investigations into firearms trafficking and acknowledged the importance of effective implementation of the Firearms Protocol in order to foster this kind of investigations. Finally, Ms. Karin Olofsson, the Secretary General of the Parliamentary Forum on SALW, acknowledged their longstanding cooperation with the Global Firearms Programme and emphasised the important role of parliamentarians in adopting adequate institutional and legislative frameworks and effective firearms control regimes, in a manner consistent with the Firearms Protocol. Additionally, she explained how parliamentarians can develop national, regional or international action plans to further action against this issue, and promoting the universalization of the Protocol.

How to improve the implementation of the Firearms Protocol and strengthen its links to the Organized Crime Convention?

The second and last session of the event aimed at exploring how the provisions of the Protocol come to life. To that end, national experts in various relevant fields shared their experiences.

Ms. Maria Fernanda Perez Galindo, Head of the Directorate-General for International Cooperation in the Office of the Attorney General of the Republic of Mexico, focused her intervention on the human factor of the illicit firearms issue. She highlighted the capacity of the Firearms Protocol to combat not only firearms trafficking, but also, by doing so, to reduce its devastating impact on peace, security and development, as catalyst and aggravating factor for other forms of crime by facilitating organized criminal groups and drug-trafficking cartels to conduct their illicit activities. “Data collection, together with international cooperation and information sharing” were crucial to effectively address the issue, she mentioned. Mr. Anzian Kouadja, Deputy Executive Director of the National Commission for the Fight against Proliferation and Illicit Circulation of SALW of Cote d’Ivoire, gave an overview on the technical assistance provided by UNODC’s Global Firearms Programme to Cote d’Ivoire, in line with the Protocol, in five different areas, including data collection and analysis, effective investigation and prosecution of firearms criminality, capacity building and preventive measures such as collection campaigns and safe stockpiles, and regional and international cooperation. Subsequently, Professor Christian Ponti from the Observatory on Organized Crime (CROSS) at the University of Milan built upon those interventions, to highlight the importance of the new Review Mechanism on the Implementation of the Protocol, which will start in December 2020 and will help not only to monitor its effective implementation, but also to “explore all of the potentialities of the Protocol”. He underscored the important role of academia and experts from civil society in contributing with information to fill the questionnaires by States parties, promoting an “annalistic approach”.

Ms. Simonetta Grassi, Head of UNODC’s Global Firearms Programme, closed the panel providing an overview of how UNODC’s Global Firearms Programme assisted Member States in supporting the implementing of the Protocol through a holistic and integrated approach based on five main pillars and cross cutting issues, including: policy and legislative development; preventive and security measures; criminal justice response; international cooperation and information exchange; and monitoring the illicit arms flows in support to achieve target 16.4 of the Sustainable Development Goals, to “significantly reduce illicit arms flows by 2030”. The Global Firearms Programme will also support States in the Review Mechanism.

You can listen the recorded event through this link.