Celebrating 20th Anniversary of the Adoption of the Firearms Protocol 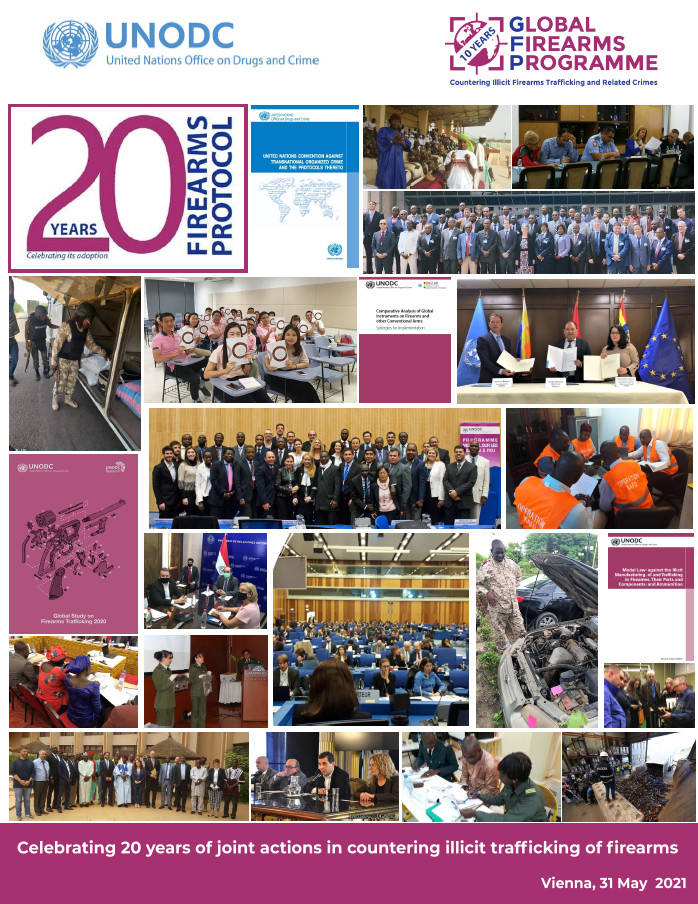 Vienna, Austria, 31 May 2021 - 20 years ago, on 31 May 2001, the Protocol against the Illicit Manufacturing and Trafficking in Firearms, their Parts and Components and Ammunition (Firearms Protocol) was adopted by resolution 55/255 at the fifty-fifth session of the General Assembly of the United Nations.

The adoption of the Firearms Protocol marked a turning point in international actions against illicit firearms. Also today, twenty years later, it remains a crucial tool to prevent, combat and eradicate illicit activities involving firearms, and their links to organized crime and terrorism. The Protocol has been instrumental in raising awareness among Member States that the problem of illicit firearms is an issue of crime prevention, of crime control and of combating illegal trafficking, and thus, that the problem of illicit firearms has both a domestic and an international dimension for all countries involved.

Celebrating the 20th anniversary, we recall the statement of UN Secretary-General Mr. António Guterres on the occasion of the entry into force of the Protocol, underlying that “The full and effective implementation of (…) the Firearms Protocol is important in efforts to combat the acquisition of small arms and light weapons by all unauthorized recipients, including terrorist groups (…) and provide the normative framework and investigative tools for enhanced criminal justice response (…)”.

The Firearms Protocol is an expression of the principle of accountability in small arms control: No longer, firearms, their parts and components and ammunition should cross the border of another State without the knowledge of that State. To that end, States parties to the Firearms Protocol commit themselves to authorize the export of these items only to those States that have issued a corresponding import authorization and vice versa. The enforceability of this principle relies on the possibility to identify and trace firearms, which requires – in accordance with the Firearms Protocol – their marking as well as the maintenance of records that cover the entire lifecycle of a firearms. Furthermore, States parties must criminalize the illicit manufacturing of and trafficking in these items, as well as the tampering with their markings, so as to ensure that any violation of these principles should be investigated and prosecuted and the trafficking networks and their leaders should be brought to justice. The Protocol is the only global legally binding instrument that addresses the criminal dimension of illicit firearms trafficking and establishes criminal offences.

After the ground-breaking adoption of the Firearms Protocol by the General Assembly on 31 May 2001, more global instruments have followed. Only two months later the Programme of Action on Small Arms was adopted, followed, in 2005, by the International Tracing Instrument (both non-binding political instruments). In 2013, the Arms Trade Treaty further completed and enhanced the international framework on small arms control. The joint national implementation of these instruments complements and cross-fertilizes each other, through the establishment of comprehensive and harmonized firearms control regimes.

As we celebrate the 20th anniversary of the adoption of the Firearms Protocol, with 119 States Parties today, we acknowledge its responsiveness to new and emerging forms of manufacturing and trafficking linked to organised crime and terrorism.

Simonetta Grassi: “UNODC has a unique approach built on years of experience in addressing illicit firearms trafficking and interlinked challenges of organized crime, terrorism, and corruption. 20 years after the adoption of the Firearms Protocol, we reassure our commitment to continue supporting the countries in implementing the Firearms Protocol and its parent Convention on Transnational Organized Crime, to strengthen their capacities and efforts in preventing and countering the illicit firearms trafficking and reducing the negative impact it has on peace, security, sustainable development and the rule of law.”

UNODC’s Global Firearms Programme, also celebrating its 10th anniversary this year, assists governments to implement the Firearms Protocol through a holistic and integrated approach based on five main pillars. These pillars include: legislative and policy development, preventive and security measures, criminal justice responses, international cooperation and information exchange, and the monitoring of illicit arms flows. Moreover, GFP is committed to encouraging gender-mainstreaming, promoting human rights, and supporting the participation and oversight of civil society as well as public awareness and visibility. The inclusion of these transversal issues in GFP’s work is an essential element to help UNODC to facilitate that the decisions related to the implementation of the Protocol are tailored to the needs and realities of those to whom they seek to impact.

Click here to watch the video on the 20th Anniversary of the Adoption of the Firearms Protocol.