On 8 July 2020, the National Assembly of the Central African Republic adopted the new Law on the general regime of conventional arms, the parts, components and ammunition. The law will be instrumental in supporting the fight against illicit arms trafficking in the country and in the sub-region. The new law will also be key in supporting the implementation of the Firearms Protocol, the Arms Trade Treaty and the Kinshasa Convention on Small Arms and Light Weapons, the newly adopted regional instrument aimed at fighting the scourge of illicit arms proliferation in the Central African sub-region.

One year after the signing of the Political Agreement for Peace and Reconciliation in the Central African Republic, although there has been an overall decrease in violence, there continue intermittent but serious incidents of violence and human rights violations and many challenges abound. In this context the law is a positive sign with regards to the measures put in place and the efforts towards eradicating the root causes of the security problems affecting the country. As recently mentioned by UN Secretary General, Antonio Guterres, the stability of the Central African Republic and that of the region are inextricably intertwined. 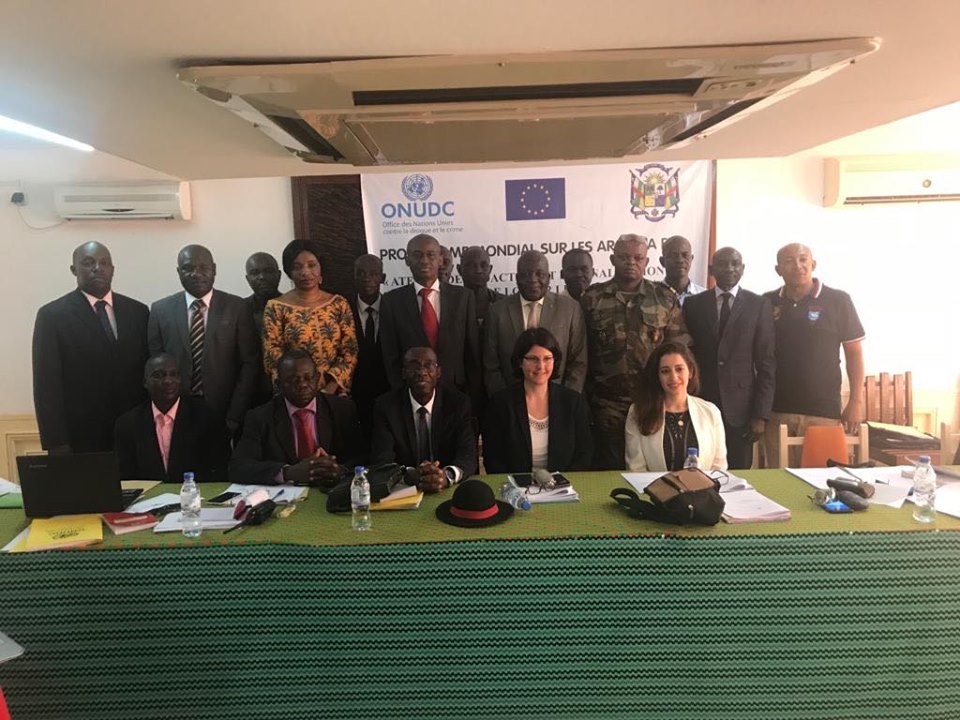 Mr. Jean-Pierre Betindji, Executive Secretary of the National Commission on Small Arms and Light Weapons of the Central African Republic (NatCom SALW) welcomed the development: “We are happy about this outcome after a process starting in June 2019. On behalf of the Technical Secretariat, and the members of the drafting committee, we want to express our gratitude for the support we have received for this project. We are looking forward to continuing our collaboration with UNODC on the priorities identified in the joint roadmap we developed”. Ms. Simonetta Grassi, head of UNODC’s Global Firearms Programme, congratulated the Central African Republic for the new law, and stated that “UNODC remains committed to support national authorities in putting in place relevant measure to implement it”. She also highlighted that the fight against illicit arms trafficking should be part of coordinated regional efforts, “firearms trafficking is transnational by definition, the efforts put in place in a region to fight this are only as strong as its weakest link, which must continue to be addressed”, she added.

The law is the result of a year long comprehensive legislative assistancee package provided by UNODC in support of the mandate of the NatCom SALW, which included expert advice, a thorough evaluation of existing legislation and international commitments, a series of expert workshops and the establishment of a drafting committee including firearms and legal experts from different institutions and ministries, including the NatCom SALW itself, the Ministry of Interior, the Ministry of Justice, the Ministry of Defense and the Ministry of Foreign Affairs. In 2019, UNODC signed a roadmap with the NatCom SALW in order to support their efforts in the fight against arms trafficking, and which will support the implementation of the new law.

The law includes, inter alia, provisions on arms definitions and classification; their manufacture and recordkeeping; securing and stockpiling; transfer and brokering; possession; as well as on criminal investigations, international cooperation -including tracing- and criminal and administrative sanctions.

UNODC is in discussions with the Economic Community of Central African States (ECCAS) and with various countries in the sub region to identify how it can better support the development of updated and harmonized legislation in the sub region.

The support provided by UNODC is part of the project "Countering transnational illicit arms trafficking through the implementation of the United Nations Convention Against Transnational Organized Crime and its Firearms Protocol" funded by the European Union.