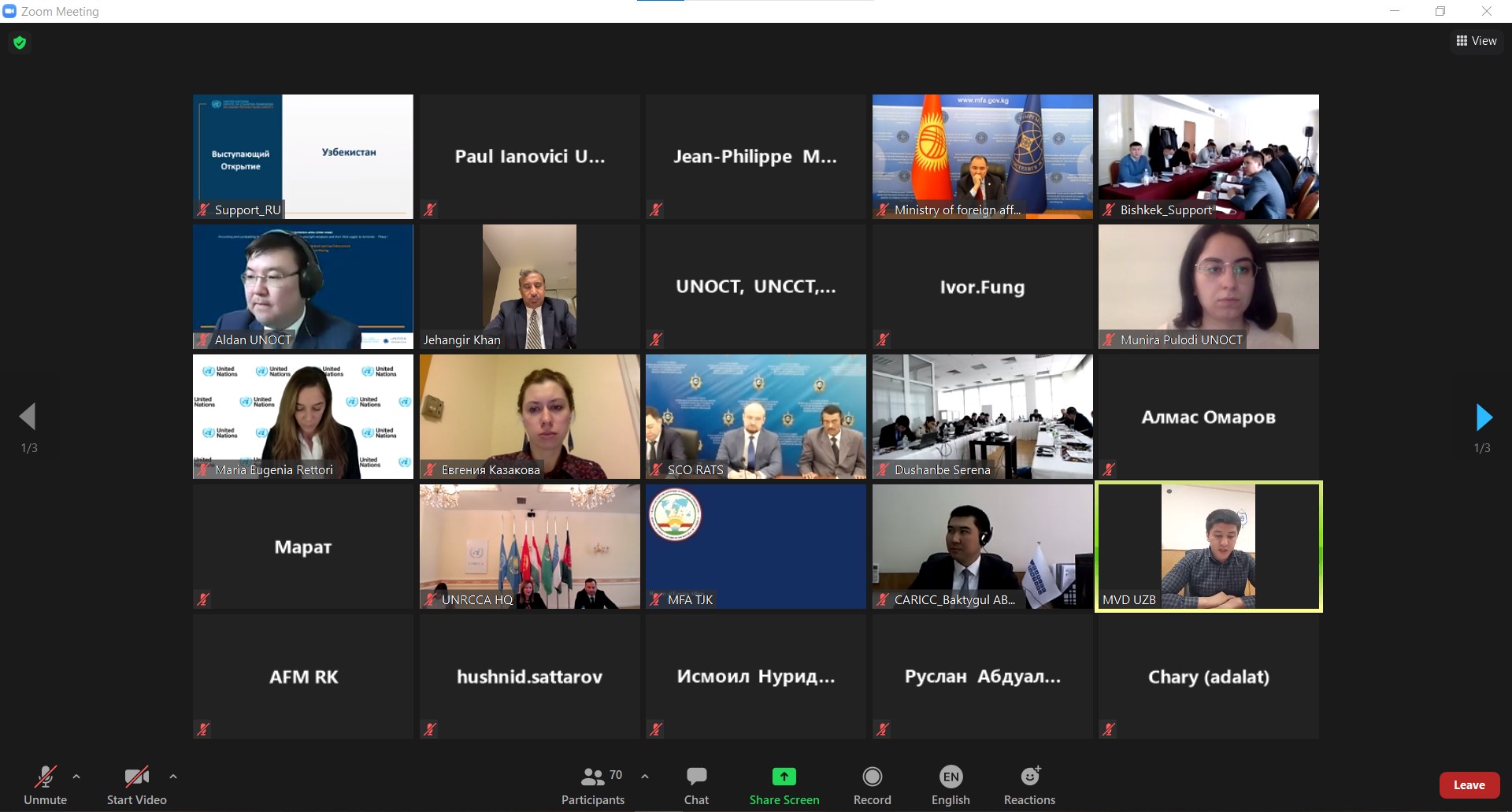 The three-day workshop focused on preventing and combatting the illicit trafficking of small-arms and light weapons and their illicit supply to terrorists through fostering judicial and law enforcement cooperation and information sharing. Approximately one hundred representatives from national institutions of Central Asian states as well as from regional and international organizations took part in the event. The workshop was opened by high level representatives of the states and international organizations. Welcome speeches were presented by Mr. Vladimir Voronkov, Under-Secretary-General for Counter-Terrorism and Executive Director of UNCCT, UNOCT; H.E. Mr. Oleg Syromolotov, Deputy Foreign Minister of the Russian Federation; Ms. Izumi Nakamitsu, Under-Secretary-General and High Representative for Disarmament Affairs, United Nations Office for Disarmaments Affairs (UNODA); Ms. Natalia Gherman, Special Representative of the United Nations Secretary-General and Head of the United Nations Regional Centre for Preventive Diplomacy for Central Asia (UNRCCA); Ms. Michèle Coninsx, Assistant Secretary-General and Executive Director of the Counter-Terrorism Committee Executive Directorate (CTED).

Representing UNODC during the opening ceremony, Mr. John Brandolino, Director of the Division for Treaty Affairs, has highlighted in his speech  the “importance of the cooperation and information exchange at regional and international level, giving the Central Asian representatives the opportunity to discuss and analyze the normative and institutional challenges in international exchanges of judicial information and law enforcement cooperation”. 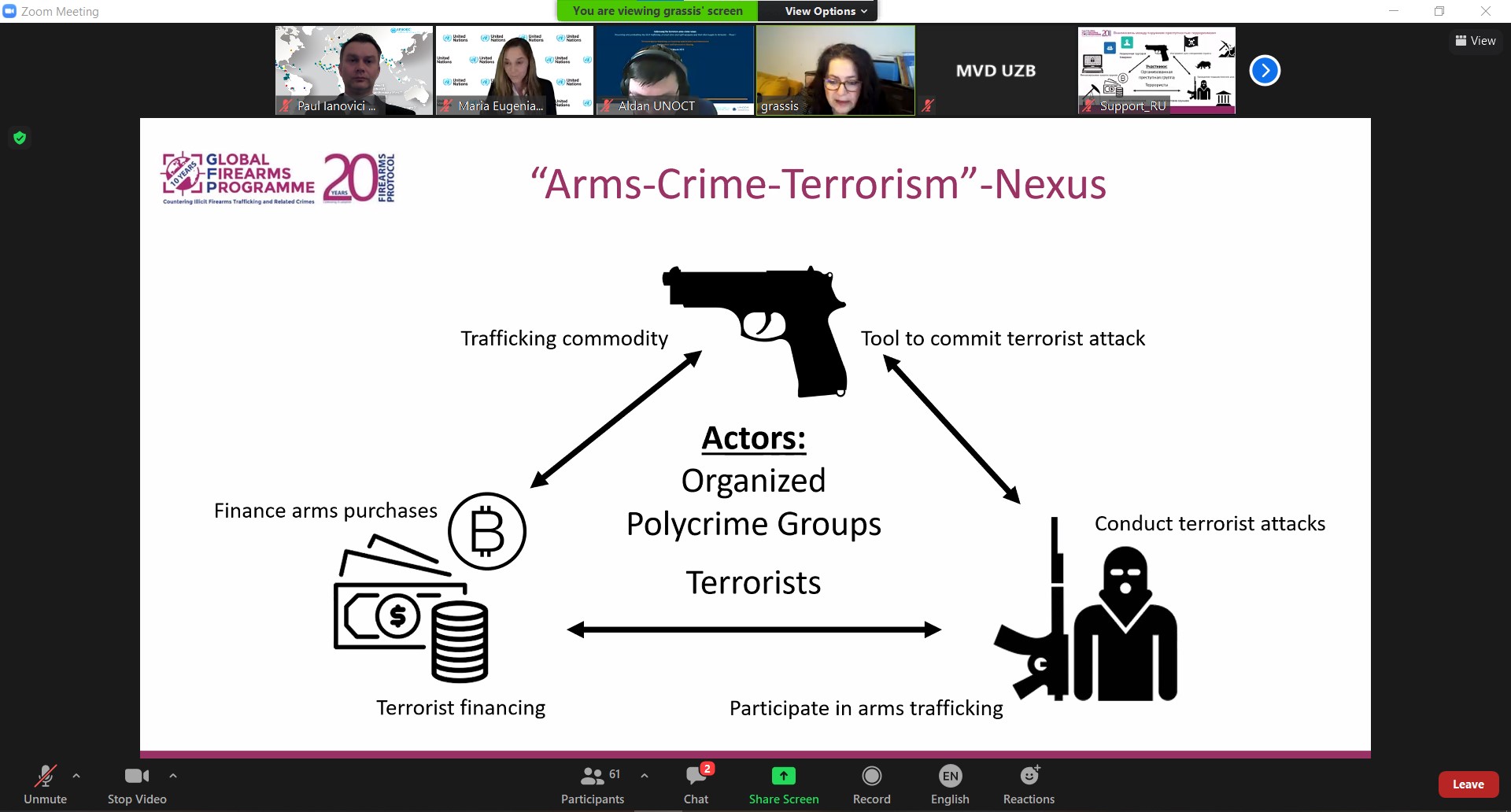 Ms. Simonetta Grassi, Head of the UNODC Global Firearms Programme, presented to the participants the overall impact of firearms/crime/terrorists nexus on stability. She continued by presenting the most relevant international legal instruments, in particular the UN Protocol against the Illicit Manufacturing of and Trafficking in Firearms, Their parts and Components and Ammunition (Firearms Protocol) and its parent Convention against Transnational Organized Crime (UNTOC) as the main foundational legally binding instruments that provide the legal framework for the Member States to facilitate exchange information and international cooperation at bilateral, regional and international level, in order to prevent and counter firearms trafficking and its links to organized and other serious crimes, in particular terrorism.

In the same time, participants were introduced to relevant UN Security Council Resolutions, in particular UNSCR 1373 (2001) and UNSCR 2370 (2017), and the related 2015 Madrid Guiding Principles, which focus on preventing terrorists from acquiring weapons, as well as strengthening controls over small arms and light weapons (SALW) and fostering judicial international cooperation and sharing of information, and law enforcement cooperation.

The representatives from the Ministries of Foreign Affairs, Interior, and Justice - including General Prosecutor’s Office, as well as National Security Committees, Migration, Customs and Border Agencies from Kazakhstan, Kyrgyzstan, Tajikistan, Turkmenistan and Uzbekistan provided an overview on progress made in facilitating cooperation and information sharing in addressing the terrorism-arms-crime nexus to prevent and combat the illicit trafficking of small-arms and light weapons and their illicit supply to terrorists.

The workshop served as a platform to explore the possibilities of sharing information and enhancing the  regional cooperation in responding to the terrorism-arms-crime nexus in Central Asia. Moreover, during the workshop participants shared also some best practices regarding suspected terrorists/criminals involved in illicit arms trafficking, as well as national and regional responses to prevent firearms diversion to terrorists, and discussed technical assistance support that the international organizations can provide in order to develop the national  and regional capacities to counter illicit firearms trafficking.

The regional workshop was implemented within the framework of the UNCCT-UNODC joint project to address the connection between terrorism, organized crime and the illicit trafficking of small arms and light weapons (SALW) in Central Asia funded by the Russian Federation and the Kingdom of Saudi Arabia.