UNODC GFP described the support provided so far to the Executive Branch in Montenegro by developing a legislative gap analysis, an issue paper on special investigative measures and comparative analysis of the criminal justice response against drugs trafficking, human trafficking and firearms offences,  and the review and analysis of the judicial practice on firearms offences.

The MPs learned about the specific proposals for amending the Criminal Code and harmonizing its provisions with the Firearms Protocol, among others by introducing the institute of attempt to commit firearms trafficking, the criminalization of firearms and ammunition parts and components, the criminalization of falsifying and obliterating marks, and most importantly, the introduction of transnational element in the offence of firearms trafficking (movement across borders). The MPs were also made aware of the deadline for finalizing the draft amendments (mid-November 2021) by the Working Group under the Ministry of Justice. 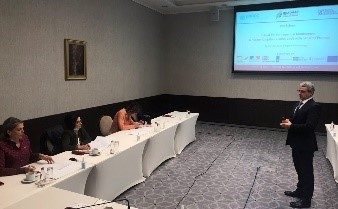 This activity is implemented with the financial support provided by Germany, France, the United Kingdom, the Netherlands, Sweden and Norway through the Western Balkans SALW Control Roadmap Trust Fund and supported by the European Union.