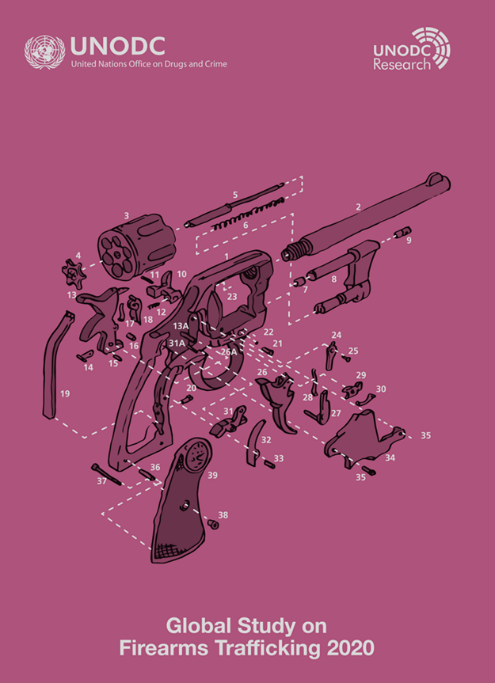 The aim of these webinars was to bring the findings and conclusions of the data collection and analysis efforts conducted by UNODC, mainly gathered in the Global Study in Firearms Trafficking 2020, closer to practitioners, experts and policy-makers in those regions, in order to support an evidence-based approach in their work to prevent and combat illicit firearms trafficking and related crimes.

Overall, the webinars highlighted the need for a more strategic vision and proactive responsiveness from criminal justice systems in order to look beyond the seized firearms and give priority to the objective of investigating and prosecuting the illicit trafficking activity and the importance of promoting joint approaches and coordinated actions to enhance regional and international cooperation in this field.

Perspectives for Eastern and Southern Africa

The webinar was co-organized by GFP and UNODC’s Regional Offices for East Africa (ROEA) and for Southern Africa (ROSAF). The event gathered more than 60 practitioners from these sub regions, as well as representatives from sub regional organisations and donor countries.

The event opened with welcoming remarks from Ms. Simonetta Grassi, head of the UNODC Global Firearms Programme; Ms. Katrin Hagemann, Deputy Head of the EU Delegation in Kenya; Mr. Johan Kruger, Representative of ROEA; and Ms. Zhuldyz Akisheva, UNODC Regional Representative for Southern Africa. It was followed by a panel discussion with presentation on the illicit firearms issue and its linkages to other problems and crimes in the region. 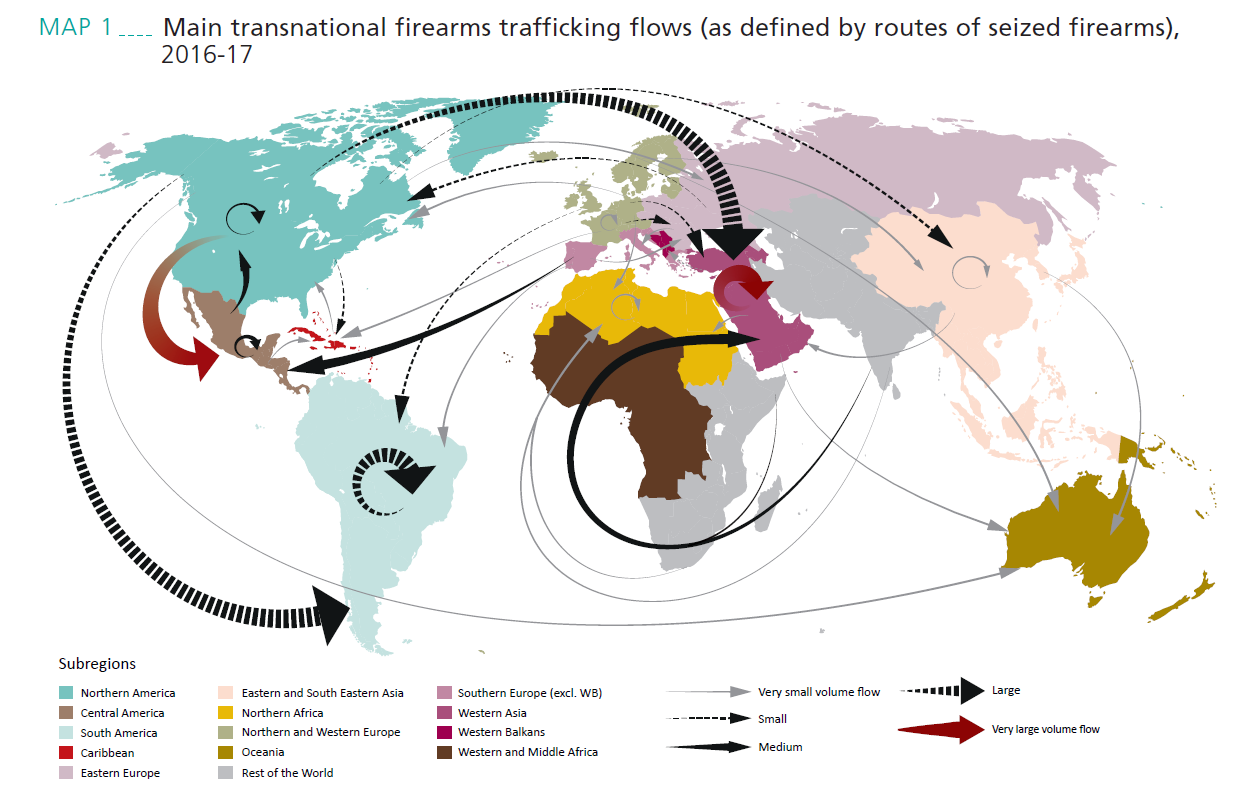 Other main ideas were the need to scale up capacities to trace seized firearms and collect data, the increased insecurity in the countries along the trafficking routes towards the conflict areas, the need for effective border controls, as well as the need to prevent terrorists from acquiring weapons and addressing the links to violent crime.

You can find more information about the webinar on the Perspectives for Eastern and Southern Africa here.

Perspectives for Western and Central Africa 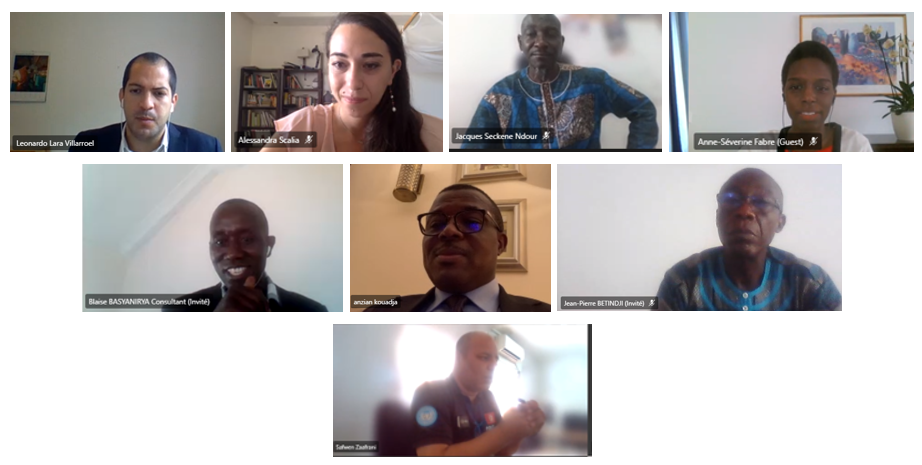 This webinar was co-organised by GFP and UNODC’s Regional Office for West and Central Africa (ROSEN). The event brought together more than 40 practitioners, representatives from sub regional organizations and donor countries.

The event started with welcoming remarks from Mr. Leonardo Lara (GFP), and officially opened by the Deputy Representative of ROSEN, Mr. Kameldy Neldjingaye, who highlighted the existing links between different types of trafficking in the subregion as well as the need to better understand this.

The panel discussion then started with a presentation of Ms. Alessandra Scalia, Research Section in ROSEN, who stressed the importance of understanding the problem to be able to have proper policy options. After that, Mr. Jacques Ndour, from GFP, presented the main findings of the Global Study. It was followed by the Permanent Secretary of the National Commission on Small Arms and Light Weapons of Central African Republic, Mr. Jean-Pierre Betindji, who mentioned the importance of technical assistance to enhance data collection capacities, and he reminded that Central African Republic recently adopted a new Arms Law  and a firearms registry with the support of GFP. Mr. Anzian Koadja, Deputy Executive Secretary of the National Commission on Small Arms and Light Weapons of Cote d’Ivoire, then stressed the importance of strengthening border control measures in order to fight illicit firearms trafficking more effectively, as well as the tracing of firearms. Lastly, Ms. Anne-Severine Favre, Data Expert from the Small Arms Survey, mentioned the importance of UNODC’s data collection efforts to support the monitoring and attainment of the Sustainable Development Goals, and reminded the importance of focusing on other indicators too.

The meeting ended with a lively question and answer session in which many speakers took the floor to share their experiences.

You can find more information about the webinar on Perspectives for Western and Central Africa here.

The event gathered more than 170 practitioners, policymakers, regional representatives of UNODC and representatives from international and regional organisations and civil society from Latin America.

Actively moderated by Ms. Lucia Consoli, GFP’s Regional Coordinator, the first session started with a presentation of the 2020 Study’s findings and its regional dimension by Mr. Roberto Codesal, GFP. After that, Ms. Salome Flores (Centre of Excellence for Statistic Information of the Government in Mexico) emphasised the importance of collecting quality data to measure SDG indicator 16.4.2, including via UNODC’s Illicit Arms Flows Questionnaire and highlighted the need for more human-centred indicators. Ms. Cecilia Farfán (Head of Programmes for Research on Security from the University of California in San Diego) also stressed the need for human-centred approach, as well as not disregarding the gender dimension of armed violence, and she mentioned the need to identify and prioritise efforts on addressing those criminal businesses that rely on illicit firearms to conduct their activities to optimise results. 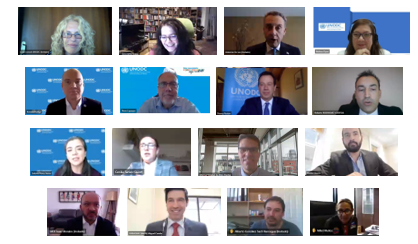 During the second session representative from Brazil, Honduras, Mexico and Paraguay shared their experiences and views on the main national and sub-regional perspectives of firearms trafficking and strategic responses.

Mr. Marcus Vinicius da Silva Dantas, from the Federal Police in Brazil, mentioned that Brazil has recently adopted a new norm that facilitates the analysis of seized firearms, and he also shared the country’s experience in adopting a firearms-related data collection and analysis system that significantly improved the national capacities to address illicit firearms issue from an intelligence-led approach. Hector Osorio Bográn, Legal Advisor of the Cabinet of Security and Defence from Honduras Government, underlined that firearms trafficking remains a very invisible but very present crime in Central America. He also highlighted that Honduras has recently adopted a new Firearms Law and is in the process developing a regulation to implement it. On his part, Mr. Isaac Morales Tenorio, Coordinator of Multidimensional Security in the Ministry of Foreign Affairs of Mexico, mentioned the importance of promoting synergies and regional approaches. He also referred to a human-centred approach and emphasised the need for a Latin American strategy to combat the illicit firearms issue and strengthening regional cooperation.

Finally, Mr. Miguel Candia Ibarra, Director of Special Affairs, Ministry of Foreign Affairs of Paraguay, referred to the recently signed Roadmap between Paraguay and UNODC to effectively prevent and combat illicit firearms trafficking and recalled the development of a firearms regulation supplementing the Firearms Law. He also mentioned the importance of data collection and inter-institutional cooperation and information exchange to effectively combat trafficking.

The event finished with an enriching discussion on the possibility of developing a common vision or strategy for Latin America to prevent and counter the problem of illicit firearms trafficking and misuse, and its links to other serious crimes in the region. All the panellists and additional speakers from the floor expressed their positive views on the importance to enhance cooperation and harmonise objectives and common goals in the region.

The webinar concluded with a questions and answers session, where participants actively engaged in discussions with the panellists, sharing experiences and lessons learned on the collection and analysis of firearms related data in the region.

You can find more information about the webinar on the Perspectives forLatin America here.

You can read the full Global Study on Firearms Trafficking 2020 here.

The series of webinars are part of the Monitoring of Illicit Arms Flows Initiative of the Global Firearms Programme, and they were organised with the support of the European Union.