On 13 May 2019 , Bolivian Minister of Government, Carlos Romero Bonifaz, the United Nations Office against Drugs and Crime (UNODC) Representative in Bolivia, Thierry Rostan, and the Head of the Global Firearms Programme (GFP), Simonetta Grassi, signed a Letter of Understanding to formalise the accession of the Plurinational State of Bolivia to the "Protocol of the United Nations against the manufacture and illicit trafficking of firearms, their parts and components and ammunition" of the United Nations Convention against Transnational Organized Crime. 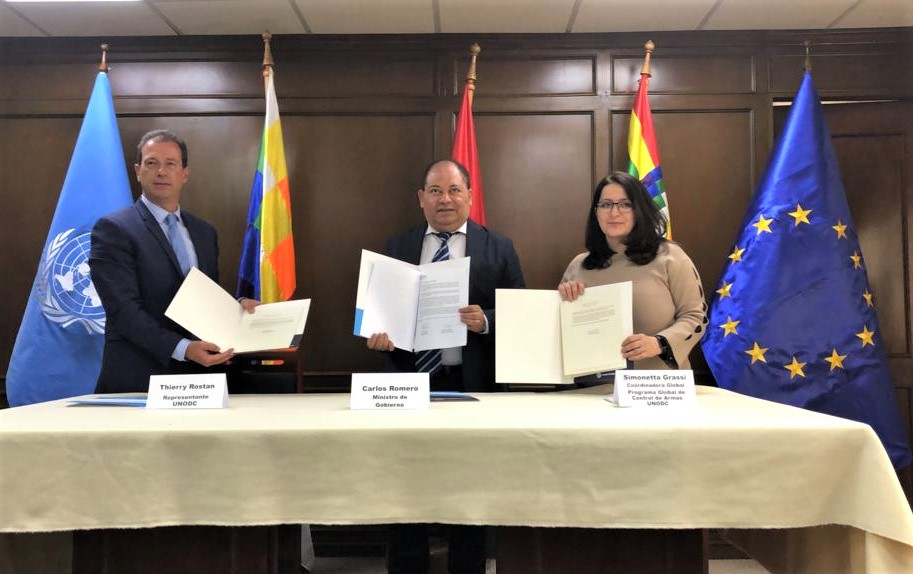 The head of the Global Firearms Programme, Simonetta Grassi, highlighted during her intervention, the urgency and importance of addressing the problem of illicit trafficking and misuse of firearms from a holistic and comprehensive manner. She also emphasised the need to prevent the access of transnational organised groups to illicit firearms, as they are both a profitable source of income and a catalyser of violence and other serious crimes. For his part, the Representative of the UNODC in Bolivia stated that the problem of illicit trafficking and misuse of firearms represent a serious threat to human security and social stability, as well as a serious obstacle to the achievement of the 2030 Agenda for Sustainable Development.

The Plurinational State of Bolivia and UNODC Global Firearms Programme will strengthen their collaboration in the prevention and combatting of illicit firearms trafficking. In this regard, the purpose of Bolivia's accession to the Protocol within its legal framework is to better regulate the possession of firearms  to avoid their diversion to the illicit market and their use to commit crimes. It seeks to strengthen national capacities to prevent, detect, investigate and prosecute illicit firearms trafficking and its links to other forms of crime, such as transnational organised crime, drug trafficking and terrorism.

Following this event, the UNODC Global Firearms Programme conducted an assessment mission in the country from 13 to 17 May 2019, upon request of the country. The main objective of the mission was to better understand its legal and institutional frameworks as well as the existing mechanisms concerning the prevention and combat of illicit firearms trafficking, with the aim of providing Bolivia with more effective and tailored support to access and implement the Firearms Protocol.

As part of this mission, the GFP attended high level meetings with relevant national authorities of the country, including the Minister of Government, Minister of Defence, Minister of Foreign Affairs, and the Plurinational Assembly. Likewise, the Global Firearms Programme also met the Anti-Crime Special Forces, the State Attorney General and the President of the Supreme Court of Justice. In addition to these meetings, the GFP also visited the registry of firearms, ammunition and explosives for military use, the registry for police use and the registry for civil use to better understand their functioning.

All these visits and conversations helped the GFP to better understand the problematic of illicit firearms in the Plurinational State of Bolivia, and it will continue supporting the country in its efforts to strengthen its national system of arms control and the fight against its illicit manufacture and trafficking, and its links with organized crime, by carrying out further activities in cooperation with Bolivia in the short and medium term.

This initiative was conducted thanks to the financial support of the European Union.