From 25 March to 4 April 2019, the Global Firearms Programme (GFP) conducted an assessment mission in El Salvador, Honduras and Guatemala upon the request of these countries. The main objectives of the mission were broadening the understanding of their legal and institutional frameworks and the existing mechanisms concerning the prevention and combat of illicit firearms trafficking, as well as identifying the relevant actors in order to develop an assistance plan tailored to their needs, both at national and regional level, with the aim of identifying the assistance needs and effectively contributing to their national efforts to restore security and stability 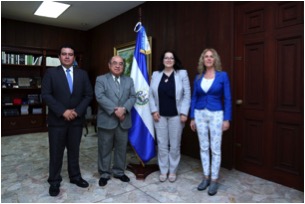 While the illicit trafficking of firearms is a global problem, each country and region faces different needs and priorities. In Central America there are some of the highest levels of homicides committed with firearms, and it also suffers other forms of crime, such as drug trafficking and criminal gangs, aggravated by the access to illicit weapons. In this context, and upon the request of El Salvador, Honduras and Guatemala, the GFP will be providing assistance to the three countries of the Northern Triangle of Central America to effectively prevent and combat this issue. The assistance will be part of a GFP project in Latin American and the Caribbean region, financially supported by the European Union through the DG-DEVCO. This assessment mission was a step previous to designing the roadmap for the project.

As part of its mission in El Salvador, which took place from 25 to 27 March, several meetings were held at the highest level with the different Ministers of Justice and Public Security, Defence, and Foreign Affairs; the President of the Supreme Court of Justice; the Deputy Prosecutor of the Attorney General's Office; Chief of the National Police; and Chief of Customs Contraband Enforcement Unit. As part of their meetings, the GFP delegates visited the National Registry of Firearms of the Ministry of Defence, and the Firearms and Explosives Division of the National Police, to better understand the administrative and technical systems that are being used. Additionally, the mission included a visit to the General Secretary of the Central American Integration System (SICA), where it was presented the previous work done by CASAC and new expectations on this matter in the region. 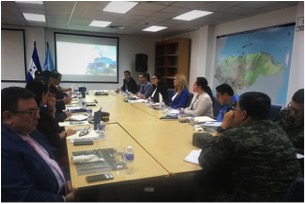 Afterwards, the GFP delegates visited Honduras, between 28 March and 1 April. During this mission, the delegates participated in high-level meetings with the Secretary of State for Government Coordination (consisting of the highest authorities of the competent national organisms and institutions, including the Vice-Minister of the Republic of Honduras, Deputy General Government Coordinator for Prevention, Security and Defence, Chief of the Armed Forces Procurement Department, a Judge Advocate of the Armed Forces, the FUSINA Commander, the Ambassador Advisor for the Foreign Affairs Ministry, a Judge of the Supreme Court and the Deputy Director of Customs Commission); the Ministries of Interior, Justice and Decentralisation and of National Defence; the high competent authorities of the National Police (National Director of Prevention and Community Security, National Director of Antinarcotics, Chief of the Computer Forensic, Cybercrime and AFIS Unit, Chief of Criminal Investigations Unit, Chief of the National Police Laboratory, and Chief of Ballistic Registry); the Director of the Judicial Academy and the Director of Customs Commission (COPRISAO); and the General Director of the Public Prosecutor's Office. As part of their mission, the GFP delegates also visited "la Armería" (the only establishment authorised to import and trade with firearms in the country) and met other relevant civil society actors, such as the Association for a More Just Society (ASJ), and the National Autonomous University of Honduras' Violence Observatory (OV-UNAH), in order to gain a broader perspective of the illicit firearms issue in the country.

Subsequently, the GFP delegates visited Guatemala between 2 and 4 April, where high-level meetings were also celebrated with the Government's Minister and Vice Minister, and the Chief of Preventive Police; the Deputy Prosecutor General and prosecutors representing the relevant specialised units; the President of the Supreme Court and the President of the Criminal Chamber; Director General of the National Forensic Science Institute (INACIF) and his team; the Director of the Directorate General for Control of Arms and Ammunition (DIGECAM); Customs Intendant; and the high authorities of the National Police competent in this matter (including Deputy Director General, Deputy Director of Criminal Investigations, Chief of Operations Department, Chief of Borders Department, and chiefs of the relevant divisions, in addition to INTERPOL Guatemala). As part of their meetings with INACIF and DIGECAM, the GFP delegates visited their facilities to better understand their proceedings and techniques, in order to assess the assistance needs. Further, the delegates also met other relevant actors, such as the Coordinator of the Institute of Education for Sustainable Development (IEPADES) and the GIZ Resident Coordinator, to gain a broader perspective of the firearms problematic in Guatemala and the region, and the role of civil society.

In addition to these meetings with the relevant national institutions and organisms, coordination meetings were held with the representatives of the Delegation of the European Union in the respective countries and the UNDP, who were informed about the activities under the global project on firearms.

Based on the findings during the mission, the GFP will elaborate a roadmap for tailored assistance to each country, in coordination with the national authorities and relevant actors.