In 2017 the UNODC Global Firearms Programme (GFP) commenced with its assistance to the arms export control authorities in Bosnia Herzegovina (BiH) for harmonizing the legislation in BiH with UN Firearms Protocol, and specifically with the provisions on import marking. In this regard, in October 2017 the GFP has organized a study visit to the Vienna Proof-House, where the BiH officials obtained information about the organization of the process of marking imported firearms and the equipment required to run the process. The GFP developed a report on the national best practices in import marking and held a workshop to present it in December 2017 in Sarajevo, BiH. 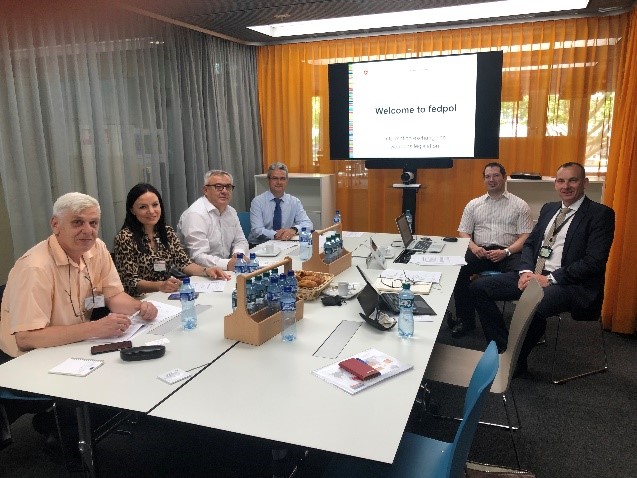 The next stage for regulating the imports of firearms in BiH is the organization and deployment of the record-keeping process, which focuses on collection and sharing of data on the imported firearms with law enforcement services. The availability of such data depository will assist both domestic and international firearms tracing.

On 03 July 2019, the GFP organized a study visit for officials from the Ministry of Foreign Trade and Economic Relations to the Federal Police of Switzerland and to the Police of the Cantone of Bern. During the study visit the officials from BiH received information about the different types of firearms data that are registered by the federal and cantonal authorities and what are the processes for organizing the data-exchange between them. Detailed information was provided on the organization of the import marking process - main participants, duties and timelines. Examples were provided on how the data on imported firearms is recorded, how it is collected and what are the obligations of the participants in the process. The Swiss authorities presented the software, used for managing this information, and demonstrated various options for conducting search queries and obtaining statistical information that can be helpful for conducting firearms tracing. The visit to the Weapons Office of the Cantonal Police in Bern allowed the BiH officials to obtain knowledge about the organization of the record-keeping process at the cantonal level.

The information from the study visit will be used for developing the terms of references for a record-keeping system, which will be operated by the Ministry of Foreign Trade and Economic Relations of BiH, and which will contain data on markings of all imported firearms in BiH. The structure of the database would allow for entry of information on imported firearms at various levels. The system would allow also access of law enforcement agencies both at cantonal and entity levels, based on the approach adopted by the Swiss authorities.