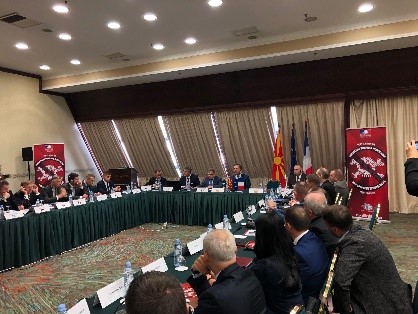 On 2-3 October 2018, UNODC's Global Firearms Programme (GFP) participated in the regional seminar on Combatting Illegal Trafficking of Firearms and Explosives in Western Balkans: Modern Technology as a Tool in the Fight against SALW and Explosives Trafficking, which took place in Skopje, the former Yugoslav Republic of Macedonia. The event was organized by the Republic of France and put together French experts and criminal justice officials from the region, including representatives from the Prosecutor's Offices and investigators from the Ministries of Interior. The goal of the event was to share information and experiences on the use and challenges posed by modern technology in countering trafficking in firearms, ammunition and explosives.

UNODC GFP delivered a presentation, which described the current activities to counter firearms trafficking at global and regional levels. The UNODC's intervention focused on updates at the regulatory, policy and operational fields and described in the second half concrete examples of the use of modern technology for prevention and detection of firearms trafficking.