On 8 November 2019, UNODC Global Firearms Programme signed a Letter of Understanding with the Cabinet of Prevention, Security and Defence of Honduras. The ceremony took place at the Ministry of Foreign Affairs of Honduras, where the Deputy Minister of Security and General Coordinator of the Cabinet of Prevention, Security and Defence, Mr Luis Suazo; the Undersecretary of International Cooperation and Promotion, Ms Norma Cerrato; and the Head of UNODC Global Firearms Programme, Ms Simonetta Grassi signed Letter of Understanding. 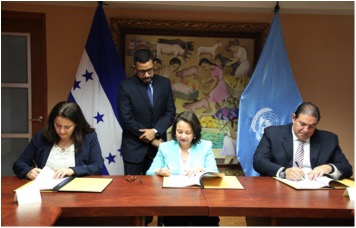 This Letter of Understanding formalises the commitment of both the Government of Honduras and the Global Firearms Programme to strengthen their cooperation to prevent and combat illicit firearms trafficking and related crimes in Honduras. The agreement builds upon the conclusions reached together during an assessment mission that was carried out in the country earlier in April 2019. According to Ms Grassi, the cooperation aims at "strengthening the legal framework for firearms control in Honduras, as well as the country's capacity for detection, investigation and prosecution of illicit firearms trafficking and related crimes".

Honduras has made significant progress in security and reducing the rates of homicides committed with firearms. An example of its efforts in this 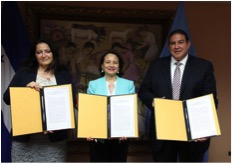 regard is the new Act on Firearms, which entered into force in May 2019, and whose regulation is currently being developed. The support that the Global Firearms Programme will offer in this process aims at ensuring an effective application of the regulatory framework, contributing to increase peace and security in the country. Likewise, the Programme seeks to promote the cooperation and harmonisation of responses between its neighbouring countries in the Northern Triangle as well as at regional and international levels.

Following the ceremony, the Global Firearms Programme organised a working session with relevant institutions with competences in firearms control in Honduras, including the National Civil Police, Customs, Armoury and the Cabinet of Prevention, Security and Defence. The aim of this session was to review together the roadmap of activities of technical assistance programmed in the framework of the cooperation agreement, which will be implemented in the coming months.