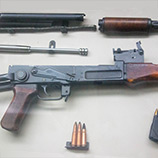 This work is being carried out in the framework of the project "Supporting Global Data Collection and Analysis on Firearms Trafficking and Fostering Cooperation and Information Sharing, in particular Among Countries along Major Trafficking Routes to/from the EU", jointly implemented by the Global Firearms Programme and the Research and Trends Analysis Branch.