During the month of November 2019, in Mexico City, Mexico, the Global Firearms Programme has organised, in close collaboration with the Government of Mexico and UNODC Mexico, two regional meetings to strengthen cooperation in Latin America to prevent and combat illicit trafficking in firearms and related crimes. These activities were part of a project funded by the European Union through the Commission's Directorate General for International Cooperation and Development (DEVCO), aimed at consolidating and expanding its assistance in Latin America from an integrated approach to counter the illicit manufacturing of and trafficking in firearms and related crimes, as well as to promote more effective regional cooperation for these purposes.

At these meetings, more than 60 experts in the area of detection, investigation and prosecution of illicit trafficking in firearms from 20 Latin American countries identified challenges and opportunities for cooperation in the area of criminal justice, and exchanged good practices and experiences to effectively tackle this problem in the region.

The availability and accessibility of illicit firearms contribute to aggravate the impact of other forms of crime, such as transnational organised crime, drug trafficking, gang violence or terrorism, as well as the incidence of domestic violence and the perpetuation of gender roles and power. As such, the illicit manufacturing of and trafficking in firearms is a serious threat to peace, justice and development, as recognised in the 2030 Agenda for Sustainable Development, through its target 16.4, which aims at "significantly reduc[ing] financial and illicit arms flows, strengthen the recovery and return of stolen assets and fight against all forms of organized crime". 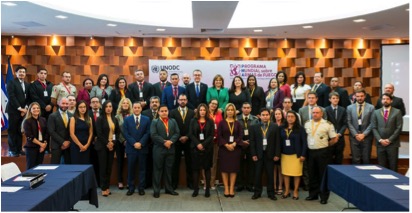 The first meeting took place from 5 to 7 November 2019, at the Mexican Foreign Affairs Ministry. It brought together prosecutors, law enforcement and customs authorities from this field of expertise from Belize, Costa Rica, Cuba, Dominican Republic, El Salvador, Guatemala, Honduras, Mexico, Panama and United States, and a representative from SICA. The opening ceremony was attended by the Under-Secretary for Multilateral Affairs and Human Rights of the Foreign Affairs Ministry of Mexico, Ms. Martha Delgado Peralta; the UNODC Representative in Mexico, Mr. Antonino De Leo; and the Head of the UNODC Global Firearms Programme, Ms. Simonetta Grassi.

At the opening ceremony, Ms. Martha Delgado emphasized the importance of designing strategic policies to address this phenomenon - something reinforced by Ms. Simonetta Grassi, who stated that evidence-based decision-making, using data collection and analysis, is the foundation of the Global Firearms Programme. Mr. Antonino De Leo recalled the words of the Secretary-General, António Guterres, during the launch of the United Nations Disarmament Agenda, recognizing that, despite the efforts, there is still a significant presence of armed violence. Illicit arms trafficking is a constantly evolving crime, and it is therefore necessary to work together to achieve greater results.

The second meeting took place between 13 and 15 November 2019, gathering experts from South American countries, including Argentina, Bolivia, Brazil, Chile, Colombia, Ecuador, Guyana, Mexico, Paraguay, Peru, Uruguay and Venezuela, as well as representatives of INTERPOL and EL PAcCTO. The Minister-Counsellor of the European Union Delegation in Mexico, Mr Jerôme Poussielgue, opened the event stressing the importance of regional cooperation and coordination to effectively counter illicit firearms. His words were followed by a welcoming speech of the Director for Crime, Corruption and Drug Prevention of the Secretary of Foreign Affairs of Mexico, Mr Mauricio Zapata, and of Ms Grassi, who pointed out the need to counter illicit firearms trafficking from an integrated and harmonised approach among neighbouring countries. 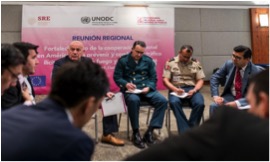 During the discussions of both meetings, several conclusions were extracted, such as the necessity to improve the cooperation and information sharing both at national and international level, the importance of data collection and analysis for evidence-based decisions, the need to strengthen legal frameworks, and the capacity building of prosecution, law enforcement and customs authorities to carry out effective detections, criminal investigations and prosecution for illicit arms trafficking. Likewise, the meetings offered the opportunity for Latin American experts in countering illicit firearms to establish channels of communication and cooperation among them.

The Global Firearms Programme will continue its support to countries in Latin America and the Caribbean to prevent and combat illicit firearms trafficking, and it will follow up with the ideas collected during these days of intense work, as part of its project financed by the European Union.