Sorry, the browser you are using is not fully supported by our site.

The Global Firearms Programme conducted an assessment mission in Paraguay 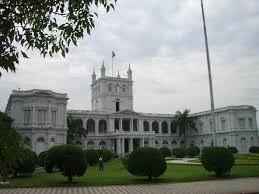 From 26 to 29 August 2019, the GFP conducted an assessment mission in Paraguay, in coordination with the Ministry of Foreign Affairs of Paraguay. The aim of this mission was to better understand the legal and institutional frameworks in the country regarding firearms control and prevention and combatting of illicit trafficking, as well as the main strategic and operational mechanisms that exist in this field. The mission also sought to identify priority needs and to establish the axes of cooperation in between the GFP and Paraguay to strengthen the capacity to prevent and combat illicit trafficking in firearms and related crimes. Additionally, the mission also served to establish contact with the relevant actors. regional and international organizations, and national partners, with a view to include them in the initiatives proposed by GFP.

During the mission meetings and visits to the different institutions of the country in charge of the control of weapons and the fight against their illicit traffic and related crimes were carried out, as well as with representatives of the European Union. The agenda of this mission included meetings with the following authorities and institutions: Vice Minister of Foreign Affairs, Ministry of Foreign Affairs, National Antidrug Secretary (SENAD), National Customs Authority, Armed Forces Directorate for War Materials (DIMABEL), Office of the Public Prosecutor, Supreme Court of Justice, Delegation of the European Union and the Ministry of the Interior.

Based on the results identified during the mission, the GFP will elaborate jointly with the national authorities a roadmap for tailored assistance to Paraguay to ensure more effective responses in the area of prevention and combatting of illicit trafficking.

This assessment mission was developed in the framework of UNODC's Global Firearms Programme and funded by the European Union.