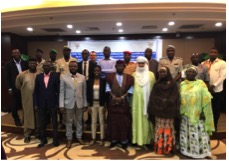 Between 20 and 21 of August 2019 in Niamey, Niger, UNODC Global Firearms Programme co-organised a workshop with the National Commission for the Collection and Control of Illicit Weapons (referred to by its French acronym CNCCAI) and Small Arms Survey, focused on "Strengthening National Institutions by Establishing a System of Indicators".

The main objective of the workshop was to strengthen Niger's capacities to combat illicit firearms by establishing a system of indicators that promote an efficient use of resources and the development of more effective policy and operative strategies. This was in line with the promotion of indicator 16.4.2 of the Sustainable Development Goals (SDG) on significantly reducing the proportion of illicit arms flows, of which the Global Firearms Programme is the co-custodian.

The event gathered the relevant stakeholders from Niger with competences, with the aim of encouraging them to take action to identify trafficking flows and points of diversion, which are considered as pre-conditions for an effective fight against the illicit flows of firearms.

Over the two days' workshop, participants addressed several topics around four modules, namely: (1) UNODC's introduction to the global firearms indicator and presentation of UNODC's efforts in collecting and facilitating data management (IAFQ and standard models); (2) the collection of data; (3) the exchange of data; and (4) the exploitation of the data.

The different panels and subsequent debates helped the relevant stakeholders to identify the opportunities and needs for the collection, exchange and use of data on firearms, as well as to assess the current situation regarding data collection on firearms in Niger. 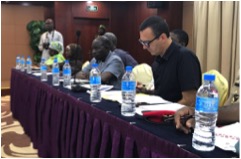 Among the discussions, the following major points emerged: (1) national experts got familiarized with indicator 16.4.2 and welcomed UNODC initiatives to assist countries in implementing their international commitments; (2) they appropriated the indicators by adapting them to the national context; (3) they highlighted the need to create a consultation framework aimed at coordinating Niger's efforts in monitoring illicit flows of arms; and (4) efforts are being made to strengthen the statistical culture and thus enable better exploitation of the data. Finally, it also raised awareness among the participants on SDG target 16.4, to significantly reduce illicit firearms flows.