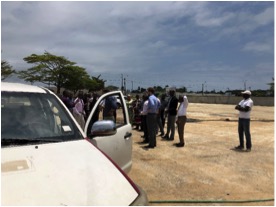 Firearms are oftentimes smuggled through land border crossings by hiding them in legally transported cargo or in smaller quantities by hiding them in private vehicles. Tackling this modus operandi requires law enforcement agencies to profile and select travellers and vehicles according to specific methodologies. To contribute to this fight, in September 2019, UNODC's Global Firearms Programme organized a series of activities and trainings in order to strengthen the capacities of countries in the Sahel, as well as neighbouring states. The aim was to support countries to detect firearms trafficking at land border crossings and improve how subsequent investigations take place.

From 23 to 27 September 2019, in Grand-Bassam, Côte d'Ivoire, the Global Firearms Programme gathered representatives from Burkina Faso, Côte d'Ivoire and Mali in order to discuss cross-border cooperation and information exchange. The activity had participants from various bodies including police, gendarmerie, customs as well as prosecutors. During the first day of the encounter, participants shared experiences, good practices and proposed common approaches to fight firearms trafficking, particularly at border crossings. During the following days, participants focused on the development of risk assessments, local risk indicators, profiling and selection of travellers and vehicles, and completed practical exercises on the thorough searches of vehicles and persons. During the last two days, experts from INTERPOL focused on the practical use of the Illicit Arms Records and tracing Management System (iARMS) and its utility for the tracing of firearms and starting investigations on firearms trafficking. The activity was jointly co-organized with the support of the National Commission from Côte d'Ivoire on Small Arms (SALW) and Light Weapons as well as INTERPOL. 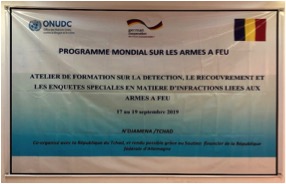 The week before, from 17 to 19 September, a similar training on the detection of firearms trafficking and on firearms investigations took place in N'Djamena, Chad. More than twenty-five experts from various institutions, including police, intelligence services and customs benefitted from the training. The event was jointly organized with the support of the National Focal Point on SALW of Chad.

In the Global Firearms Programme's efforts to use regional expertise, the different activities benefitted from trainers from Benin, Niger and Senegal.

These initiatives are part of the efforts of UNODC to fight illicit firearms trafficking, organised crime and terrorism in West and Central Africa -including through improved border control- and are embedded in the African Union's "Silencing the Guns Continental Plan of Action on the Control of Illicit SALW" aimed at implementing the AU's Silencing the Guns initiative. These activities were made possible thanks to the financial support from the Government of Germany. 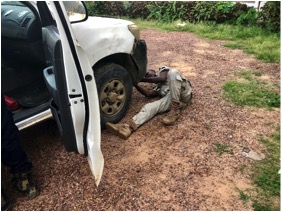