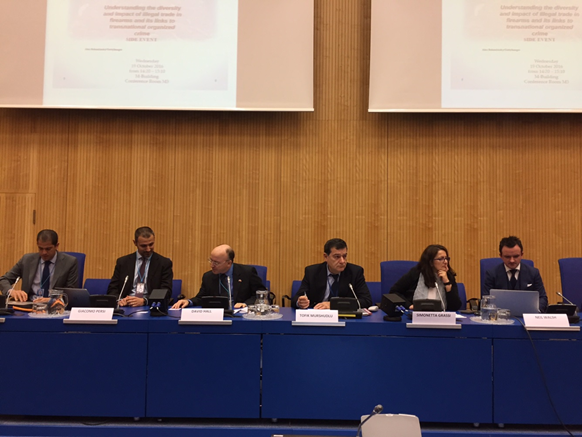 On Wednesday 19 October 2016, during the 8 th Conference of the State Parties to the United Nations Convention against Transnational Organized Crime and the Protocols thereto, UNODC's Global Firearms Programme and the Global Cybercrime Programme, organized with the Permanent Mission of the United Kingdom and Rand Europe, a nonprofit research organization, a side event on the illegal firearms trade through the hidden web.
The main objective of the side event was to present the scope and expected results of the research initiated by RAND Europe and the University of Manchester on the subject, and to raise awareness on the issue. Indeed, in UNODC's 2015 Firearms Study, one of the modalities reported by States, particularly in Europe, was the use of the Internet for trafficking of firearms and the use of parcel services for their delivery.
The side event brought together around 60 participants. Different experts in the area were invited to share their knowledge and expertise. Mr. Tofik Murshudlu, Chief of UNODC's Implementation Support Section, Organized Crime Branch, opened the event and reminded of the continuing threat of illegal trafficking in firearms, their parts and components and ammunition to security and public safety. The event was then chaired by Mr. David Hall, from the UK Permanent Mission, who underlined the interest of UK's national police on this subject.
Following the opening remarks, Neil Walsh, Chief of the Global Cybercrime Programme, provided an explanation of the concept of dark web and presented the TOR  browser. Some practical aspects were shown to the participants such as the payment of transactions with bitcoins.
Giacomo Persi, research leader at RAND, explained the organization's joint research with the University of Manchester aimed at exploring the illegal trade in firearms and explosives on the hidden web. Their research approach combines different methodologies such as document review, expert interviews, primary data collection through web crawling and scraping techniques etc. 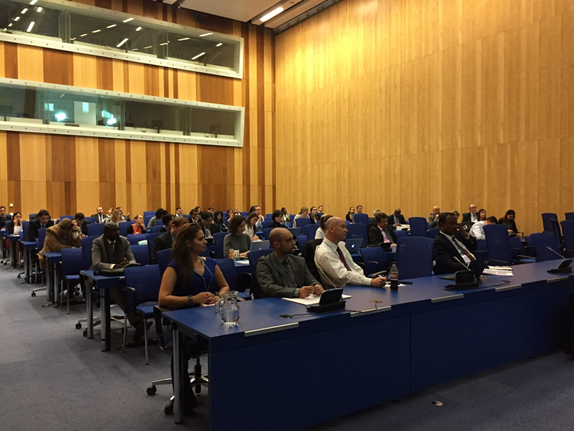 Simonetta Grassi, Head of the Global Firearms Programme, emphasized UNODC's role in the fight against this type of illicit trade. She explained how UNODC will collaborate with RAND in this initiative by assisting in the analysis of collected data, identifying technical assistance needs, and collecting legal materials from Member States among others. She also noted how these types of initiative were closely linked to UNODC's data collection and analysis mandate on firearms.
In order to effectively tackle organized crime and firearms trafficking it is crucial that criminal justice systems, including the law enforcement sector, address and anticipate new trends, routes and patterns in firearms trafficking. UNODC therefore considers that web based trafficking must be part of these efforts, where it is on-going, but also where it could grow and develop and that data and analysis based on reliable evidence are essential to addressing the complex nature of this problem.