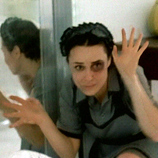 2 December 2009 - Aina's boss gave her a list of words: yes, thank you, hello, goodbye. These were the only words that Aina, then aged 18, had the right to say. Her day began at 6 a.m.: she prepared breakfast for the family's two children, then did the ironing, vacuuming, laundry, washing up, gardening and cooking. Her day ended at midnight. Aina ate the family's leftover food; she slept on the tiles in the bathroom floor.

Aina left her home in Tananarive, Madagascar, on a promise: "A job in Europe, money to send back to my family, the chance to continue my studies." Held prisoner for two years, she was beaten, threatened and never paid. A neighbour finally noticed this "young, thin girl who didn't speak" in the garden. She called the authorities. Aina's "employers" were given a six-month suspended prison sentence and fined €4,500. Aina was rescued and is now working as a nurse.

Not many of the stories of the hundreds of thousands of girls and women lured into modern day slavery through human trafficking end on such a positive note. People seeking employment as domestic workers all too often become victims of domestic slavery.

"Behind the pristine and anonymous facades of houses and apartments, thousands of people - usually young women - are facing physical and mental abuse at the hands of their captors," said UNODC Executive Director Antonio Maria Costa at the opening of a photo exhibition called " Esclavage domestique" to mark the International Day for the Abolition of Slavery.

"Very often their passports are taken away, their rights are violated and they are forced to live and work under unbearable conditions for little or no pay - until they escape or are rescued, for example, by the organizers of this exhibit", added Mr. Costa.

In fact, the issue is closer to home than many of us think: "All too often the perpetrators hide behind diplomatic immunity. I am ashamed to say that there have even been such cases here in Vienna", said Mr. Costa.

Mr. Costa called on United Nations staff who have hired help to "make sure that they are being treated fairly, paid a competitive salary with social assistance and that their rights are respected." He further cautioned: "If you witness cases of labour exploitation, please bring them to the attention of the Austrian authorities".

Through high-profile campaigns like the Global Initiative to Fight Human Trafficking (UN.GIFT) and the Blue Heart Campaign, people are becoming more aware of human trafficking - a modern form of slavery. Still, more needs to be done. "Let us strengthen international efforts to address this problem - to reduce vulnerability to this crime, to ensure that the captors are brought to justice and the victims receive compensation", said Mr. Costa in his concluding remarks.

The Austrian Government, through its Foreign Ministry, has stepped up efforts to address the issue of human trafficking, including by setting up a task force. Addressing a panel on the situation of domestic workers in Austria, Ambassador Elisabeth Tichy-Fisslberger, the national coordinator of the task force, said: "Perpetrators need to be prosecuted. We will find ways to prosecute and immunity should never be used to protect the perpetrators".

The International Day for the Abolition of Slavery is marked every year on 2 December to remind people that modern slavery works against human rights. Events are organized to encourage people to give meaning to the words of the Universal Declaration of Human Rights, according to which "no one shall be held in slavery or servitude", by taking action. This date was chosen because it was on 2 December 1949 that the General Assembly adopted the Convention for the Suppression of the Traffic in Persons and of the Exploitation of the Prostitution of Others.