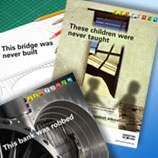 8 December 2009 - On the occasion of the International Anti-Corruption Day to be marked on 9 December, the United Nations has warned that corruption kills development and is one of the biggest impediments to reaching the Millennium Development Goals.

"When public money is stolen for private gain, it means fewer resources to build schools, hospitals, roads and water treatment facilities. When foreign aid is diverted into private bank accounts, major infrastructure projects come to a halt," said Secretary-General Ban Ki-moon. He warned that "the vulnerable suffer first and worst".

"Corruption undermines Governments' ability to act and serve their people. It siphons off the finance intended to reduce poverty and discourages investment in economies," said the Administrator of the United Nations Development Programme (UNDP), Helen Clark.

The motto for the joint UNODC-UNDP 2009 anti-corruption campaign is "Your NO Counts". "Corruption is not some vast impersonal force. It is the result of personal decisions, most often motivated by greed," said the Secretary-General. He encouraged everyone to make a pledge "to never offer or accept a bribe. Live by that motto, and the world will be a more honest place - and we will increase the chances of reaching the Millennium Development Goals".

Through a series of six posters and online material, the "Your NO Counts" campaign highlights how corruption obstructs people's access to education, health and justice, limiting their opportunity to prosper and undermining democracy.

The Executive Director of UNODC, Antonio Maria Costa, paid tribute to "heroes with integrity: anti-corruption officials who are not afraid to go after the big fish; whistleblowers who risk their jobs to expose cheating; journalists who risk their lives to investigate fraud and report the truth; prosecutors who defend justice, even when under attack from powerful forces."

The Secretary-General urged both the private and public sectors to make more effective use of the United Nations Convention against Corruption, "the world's strongest legal instrument to build integrity and fight corruption". This instrument has become even stronger with agreement on an implementation review mechanism at the recent session of the Conference of States Parties, held in Doha.

"The private sector should not lag behind Governments," said the Secretary-General, "I urge the private sector to adopt anti-corruption measures in line with the UN Convention. Companies - particularly those that subscribe to the 10th principle of the Global Compact, to work against corruption - should pledge not to cheat and should open themselves up to peer review to ensure that everyone is playing by the same rules."