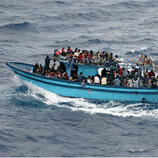 18 December 2009 - As the world marks the International Migrants Day today, UNODC draws attention to the escalating plight of migrants in Eastern Africa. Political and economic instability in the region has led to even greater numbers of people risking their lives at the hands of ruthless smugglers in order to reach safety or the chance for a better life, both within and outside Africa.

From conflict-torn Somalia, for instance, thousands of migrants undertake a dangerous journey across the Gulf of Aden to Yemen. Data from the Office of the United Nations High Commissioner for Refugees show a 30 per cent increase in the number of migrants and asylum seekers reaching Yemen between 2008 and 2009. Last year, an estimated 1,000 people died attempting to make that journey, sometimes because smugglers threw passengers overboard far from shore in order to avoid detection by Yemeni authorities.

In its World Migration Report 2008, the International Organization for Migration shows that approximately 14.5 million people migrate every year and that 10 million of them move among and within the countries of Eastern Africa.

With a low risk of detection and punishment, migrant smugglers are becoming more organized, establishing professional networks that ignore borders. An unfortunate by-product of this is that migrants are exposed to ever-increasing levels of danger. Smugglers of migrants constantly adapt routes and methods used in response to changing circumstances. Although information on migrant smuggling patterns and flows in Eastern Africa is scarce, available data suggest that this activity is widespread.

As the guardian of the United Nations Convention against Transnational Organized Crime, UNODC aims to promote global adherence to the supplementary Protocol against the Smuggling of Migrants by Land, Sea and Air and to assist States in their efforts to effectively implement it. The Migrants Protocol aims to prevent and combat the smuggling of migrants, protect the rights of smuggled migrants and promote cooperation between States.

Recently, representatives of 13 Eastern African States endorsed the UNODC Eastern Africa regional programme for the period 2009-2012, which UNODC will use as a platform to address the issues of migrant smuggling in the region, including awareness raising, legislative and policy advice, building the capacity of national institutions to investigate smuggling cases and cross border cooperation.

UNODC is also currently developing a Model Law against Smuggling of Migrants to assist States in implementing the provisions contained in the Migrants Protocol. This model law will assist Member States to review and amend existing legislation as well as adopt new legislation. The model law is designed to be adaptable to the needs of each State, whatever its legal tradition, social, economic, cultural and geographical conditions. In 2010, UNODC will release a Toolkit to Combat Migrants Smuggling to offer guidance to policymakers, law enforcers, judges, prosecutors and victim service providers.