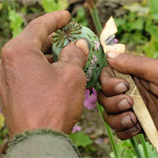 14 December 2009 - In its latest survey, entitled Opium Poppy Cultivation in South-East Asia, launched today in Bangkok, UNODC points to an increase in opium poppy cultivation in Myanmar for the third year in a row.

In Myanmar, the area under opium poppy cultivation has increased by 11 per cent over the last year and by almost 50 per cent since 2006, reaching a total of 31,700 ha in 2009. This is still a far cry from the situation in the early 1990s, when Myanmar was the world's biggest opium producer, "but the trend is going in the wrong direction", said UNODC Executive Director Antonio Maria Costa.

More than 1 million people are now involved in opium poppy cultivation in Myanmar, most of them in Shan State, where 95 per cent of Myanmar's poppy is grown.

According to Mr. Costa, "increased instability in north-eastern Myanmar is affecting the opium market. Ceasefire groups - autonomous ethnic militias like the Wa and Kachin - are selling drugs to buy weapons, and moving stocks to avoid detection."

Despite the increase in cultivation, the overall value of Myanmar's opium crop is falling since yields were down 28 per cent to 10.4 kg/ha, production fell 20 per cent (to 330 metric tons), and prices are more or less stable (at just over $300/kg). In total, the potential value of opium production in Myanmar fell by 15 per cent from $123 million in 2008 to $104 million in 2009.

In the Lao People's Democratic Republic, cultivation was up by 19 per cent, although the overall area under cultivation is small (1,900 ha) and the yield is low (6 kg/ha). Nevertheless, with one kilo of opium fetching $1,327 per kilogram (due to stable demand and scarce supply), this illicit crop remains attractive to farmers, especially as the prices of other locally produced commodities are falling. "Governments and donors need to stay the course and ensure sufficient duration of commitment and funding for all aspects of the drug issue: security, development and health", said Mr. Costa.