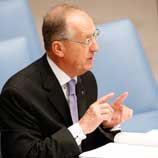 The Security Council will discuss the Secretary-General's biannual report on West Africa, which addresses transnational organized crime and trafficking and their impact on security and peace.

On 8 July, UNODC will join forces with the Department of Peacekeeping Operations, the United Nations Office for West Africa, the Department of Political Affairs and INTERPOL to launch the West Africa Coast Initiative in New York. The Initiative was first presented at the eighteenth session of the Commission on Crime Prevention and Criminal Justice of UNODC in April 2009 in Vienna. The Initiative is designed to support the implementation of the Economic Community of West African States regional action plan on illicit drug trafficking and organized crime for 2008-2011.

UNODC will also present a report entitled "Transnational trafficking and the rule of law in West Africa: a threat assessment". This report presents additional evidence of the threat posed by trafficking and related organized crime to security, stability and development in the West African subregion.

Report of the Secretary-General