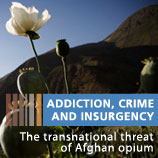 The publication shows the devastating consequences that the opium and heroin that are trafficked from Afghanistan every year have on the health and security of countries along the Balkan and Eurasian drug routes, of countries in Europe, and of China, India and the Russian Federation.

It documents how the world's deadliest drug has created a market worth billions of dollars, catering to millions of addicts, causing thousands of deaths per year, spreading HIV at an unprecedented rate and, not least, funding criminal groups, insurgents and terrorists.

Addiction, Crime and Insurgency offers a perspective that is both deeper in scope and broader in geographical coverage than earlier UNODC work on Afghanistan.

The publication will be central to a CNN interview by Christiane Amanpour, who will be interviewing UNODC Executive Director Antonio Maria Costa on Wednesday, 21 October, at 3 p.m. EDT (9 p.m. CET).

Copies of the report are available upon request. The full report will be posted on www.unodc.org on 21 October. For television producers, video footage is available. Still pictures are available for newspapers.