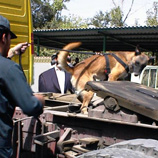 28 October 2009 - Senior officials from Afghanistan, Iran and Pakistan met in Vienna on 27 October 2009 for a ministerial meeting of the UNODC-brokered Triangular Initiative. This Initiative, launched in June 2007, is designed to strengthen drug control among the three countries most seriously affected by Afghan opium. "Since more than 90 per cent of the world's opium comes from Afghanistan and most of it is going via Iran and Pakistan, improving counter-narcotics between these three countries is essential", said UNODC Executive Director Antonio Maria Costa.

For the past two years, UNODC has been working with all three parties to enhance cross-border counter-narcotics enforcement. Drugs pose a threat to the health and security of all three countries, and many others downstream. National efforts have been made to hold back the flow of drug trafficking, particularly in Iran, where hundreds of kilometres of ditches and walls have been built to stop traffickers. But there are limits to what any State can do alone through interdiction, especially in the inhospitable deserts and mountains along Afghanistan's borders. Success depends on information exchange and intelligence-led operations targeting the major transnational networks. That is what the Triangular Initiative is designed to do.

At the meeting in Vienna, the three parties agreed to appoint permanent liaison officers to the Triangular Initiative's joint planning cell in Teheran in order to enhance analytical and operational capacity. They also agreed to establish border liaison offices on each side of their respective borders. Furthermore, they agreed to step up the number of joint patrols and joint operations (three have already been carried out). They discussed the practical modalities of such operations, particularly the need for a common communication system and information exchange.

The Initiative is not only regarded as important for improving security, it can also build confidence among the parties. "Neighbours may have their differences, but when it comes to drugs, they realize the common threat and appreciate the self-interest in working together", said Mr. Costa.

The Triangular Initiative is part of the Rainbow Strategy, conceived in the framework of the Paris Pact, a UNODC-initiated partnership of more than 50 States and organizations designed to reduce the supply, demand and trafficking of Afghan opiates. The Triangular Initiative has recently been linked to a similar cooperative platform in Central Asia, the Central Asia Regional Information and Coordination Centre. A counter-narcotics intelligence-sharing centre is foreseen for the Persian Gulf as well.

At the end of the meeting, participants briefed major partners. "We all have a vested interest in the success of this Initiative", they said. "The more drugs can be stopped at the source, the less damage will be done downstream". For more on the impact of the Afghan drugs trade see Addiction, Crime and Insurgency: The Transnational Threat of Afghan Opium.