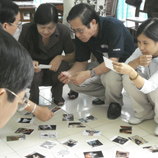 2 October 2009 - Domestic violence in Viet Nam is still often regarded as a private matter to be dealt with behind closed doors. While there exists legislation for criminal justice service providers to intervene in cases of domestic violence, putting it into practice remains a big hurdle.

UNODC recently held a five-day training course to equip law enforcement officers with the necessary tools and knowledge to effectively deal with cases of domestic violence. This first train-the-trainers session focused on the principles of gender equality, common characteristics of domestic violence and best practices in dealing with victims, witnesses and perpetrators.

The training focused on raising awareness on gender equality and encouraged participants to challenge traditional ways of thinking.

Two women survivors of domestic violence attended the training and told their personal stories to facilitate discussion on the current gaps in criminal justice services. One of the survivors, Thu Anh, believed that if the local police had intervened in time, her husband's violence would have stopped.

Specific training manuals have been developed both for trainers and for trainees, and further training courses will be held at the provincial level for criminal justice officers in Ha Noi, Thai Nguyen, Da Nang and Can Tho later in the year.

In future, it is expected that domestic violence prevention will be incorporated in all formal criminal justice practitioners' professional training in Viet Nam. For this reason, representatives from relevant academic institutions also attended this first of its kind training course in Viet Nam.